But is the Acer Aspire One Cloudbook, which is priced from $169 and ships with hardware specs eerily similar to most standard Chromebooks out there, worthy of the (often overused) title?

Acer Aspire One CloudBook Is Priced To Sell

From the new Macbook to the semi-premium ASUS Chi line by way of the cheap cloud-based HP Stream 11 — it doesn’t take much for a device to earn the title of “Chromebook Killer” by a lazy tech press.

But the Acer Aspire One Cloudbook is a decent stab at creating a Windows-based alternative to Chromebook. It offers similar low-power hardware with small on-board storage at an attractive price.

A great attempt by the world’s biggest seller of, er, Chromebooks.

We do know that this device, and a raft more on the way, have been created specifically to counter the growing popularity of notebooks running Google’s cloud-centric OS. Microsoft’s earlier efforts (which largely consisted of shouting “you’re wrong” at consumers) hasn’t had any material impact on Chromebook sales, which continue to grow year-on-year. 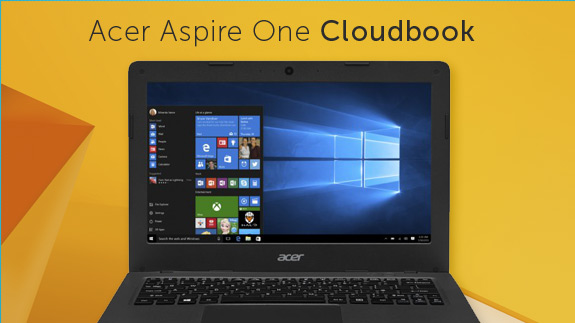 As we shared back in June, several big-name OEMs have, with some encouragement from Microsoft, been prepping low-cost laptops running Windows 10.  The strategy is an odd one. A capable Windows 10 laptop costing $169 could undermine sales of more expensive, and profitable, devices.

But is this capable? After all, while Chrome OS can run lightly on low power hardware Windows, by design, is a ‘fuller’ OS, requiring more overhead and thus more slowdown.

The Acer Aspire One Cloudbook series is priced from $169.99 (matching the cheapest Chromebook released to date) and treads dutifully into Chromebook hardware territory.

It runs on a dual-core Intel Celeron N3050 processor (Braswell based) running at a 1.6GHz and is paired with 2GB RAM.

The notebooks are available in 11.6-inch and 14-inch screen sizes, all of which are trapped at the lowly dimension of 1366×768 pixels. All of the screens are standard LCD panels and non-touch

Onboard storage options are suitably modest, with 16GB or 32GB eMMC for the 11.6-inch versions and 32GB or 64GB eMMC on the 14-inch model.

To give users some file leeway Microsoft will bundle in 100GB of free OneDrive storage (for a year) while Acer is preloading —no groaning— its suite of ‘abApp’ cloud tools to help Cloudbook owners get the most from their files and multimedia content across devices.

On the ports and accessories side:

To take full advantage of of Cortana in Windows 10 Acer has included dual digital microphones with digital signal processing to filter out background noise.

The 11.6-inch model is set to land in the US this month and Europe next month. Dates for the 14-inch model will follow.

But to get back to the question posed at the start: calling this Acer a ‘Chromebook Killer’ is too simplistic. It’s an easy tag to attach but it ignores the reasons why Chromebooks have proven popular (hint: it’s not just the price). One cheap priced Windows device won’t ‘kill’ off those reasons overnight, but it will give consumers more food for thought.

Are you likely to be tempted by an Acer Cloudbook?

Home » Hardware » Is The $169 Acer Cloudbook with Windows 10 a Chromebook Killer?