While the Chrome devs have been focused on bringing the likes of Amazon S3, WebDAV, and Dropbox support to Chrome OS, Tanaka’s Chrome App is a boon for anyone needing access to SFTP servers to upload assets or backups right from their Chromebooks.

SFTP File System has a simple interface, with some very slick Material Design cues, that makes it easy to access your servers. Upon entering the correct credentials, your SFTP file system will be mounted and accessible from the built-in Files app.

From there you can add, delete, and modify files as per usual. If something is taking too long, Chrome OS will pop up a notification asking if you’d like to abort the operation – an excellent point of integration and a huge plus if you’re working off a spotty Wi-Fi connection.

And when you’re through, you can unmount your SFTP server by clicking the eject icon in the sidebar or right-clicking and hitting “Close”. You can also save your connections to the sidebar by pressing the “Keep” button in the app, though you’ll need to enter your password again.

SFTP File System is available right from the Chrome Web Store. It’ll only work on your Chromebooks, -bases, and -boxes as the File System Provider API is only available on Chrome OS. 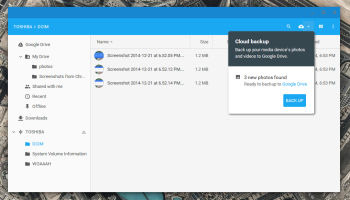