They’ve been teased, trailed and talked about for some time, but today Acer formally confirmed the existence of two brand new Chromebooks and, more surprisingly, its very first Chromebox.

Earlier this month the Taiwanese electronics giant announced that a new version of its successful ‘C720’ Chrome notebook line would use Intel Core i3 processors.

The Acer C730 and CB5-311 notebooks are expected to go on sale in select countries in the coming months.

The 11.6-inch Acer C730 (hitherto known as the Chromebook 11 and CB3) is a modest update to Acer’s successful (and ever spawning) C720 line. It has a fractionally thicker, heavier footprint than its predecessor, but will be available with a choice of two of the latest Intel Bay Trail processors: the dual-core N2830 and the quad-core N2930. 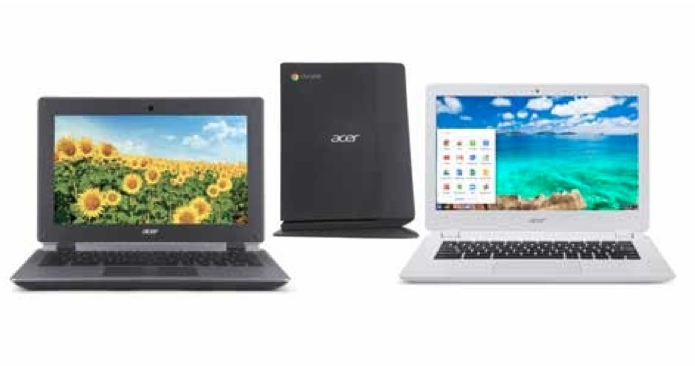 Both models use a standard LED-backlit TFT LCD display, so we’re still not quite seeing the leaps in screen quality I know that many are clamouring for. That said, the CB5 does have an ace up its sleeve: it will be available to buy with either a standard HD screen at 1366×768 pixels or a full HD screen pushing 1920×1080 pixels.

The bump in resolution will come with a bump in price and a drop in battery life. Acer says the FHD model achieves two hours less battery life than the standard model, dropping to “just” 12 hours vs. 14 hours.

Also listed is the Acer Chromebox CXI2610 powered by an Intel Celeron 2957U processor and as much as 8GB of DDR3 RAM and a choice of 16GB or 32GB SSD.

You can learn more about the devices in the company’s business solutions brochure via the link below.