Acer has announced its first convertible Chromebook, the Acer Chromebook R11 — and yes, it’s exactly the same device that we wrote about a few months ago.

The Acer Chromebook R11 is an 11.6-inch notebook with a touchscreen display. The screen can rotate a full 360 degrees to function as a tablet, or be manoeuvred into ‘tent’ and ‘display’ modes.

It is powered by a speedy Intel Celeron N3050 dual-core processor (Braswell, 1.6GHz) and comes with 2GB or memory and 16GB of flash storage. Acer say a slightly more expensive model will a marginally faster processor, 4GB RAM and 32GB of flash storage will also be available.

The IPS display pushes a standard HD (1366 x 768) resolution. Not fantastic but worth remembering that a higher FHD resolution would likely make the touch capabilities more fiddly given the small screen size.

The R11 does have a better HD webcam than previous Acer models. It offers HDR technology for better lighting and contrast. There’s also dual-antennae MiMo Wi-Fi for improved connectivity and a smattering of USB 3.0 ports.

Easily one of the thinest and lightest Chromebooks released so far, the R11 weighs a mere 1.25 kg and stands a svelte 19.2 mm thin. It will be available in either black (pictured) or white. 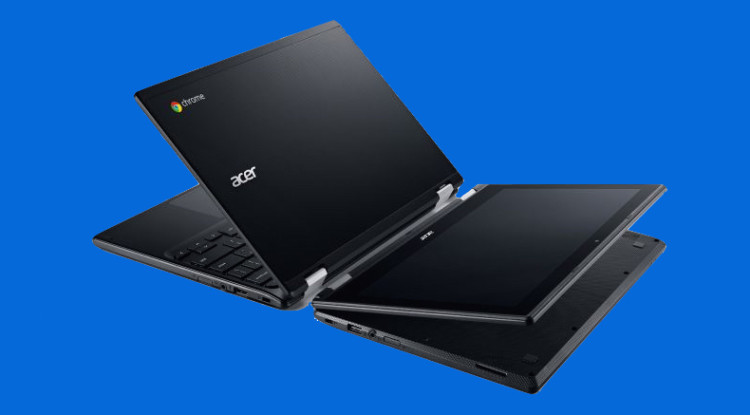 Jerry Kao, president of Notebook Business Group at Acer, says the device will provide customers “with a greater choice of Chrome OS notebooks.”

“We already offer a variety of Chromebooks from 11 to 15 inches. The addition of the convertible series is another illustration of our commitment to our customers and the category.”

With a price tag of $299, the R11 is more expensive than the ASUS Chromebook Flip but with its larger screen and far more powerful processor, it’s easily better value for money.

And with a launch date of this October, it should help make seasonal purchase decisions interesting later this year.

Not after a convertible? Lenovo has something new for you, too…