Images of Acer’s second-generation Chromebook have reportedly been leaked online.

Spanish tech blog Minimachines purports to show the device, dubbed the AC710 although doesn’t provide any details beyond this.

The design of the device won’t win any awards for beauty or originality. The Taiwanese company are instead recycling the case mould from the (bland looking) Aspire V5-17. 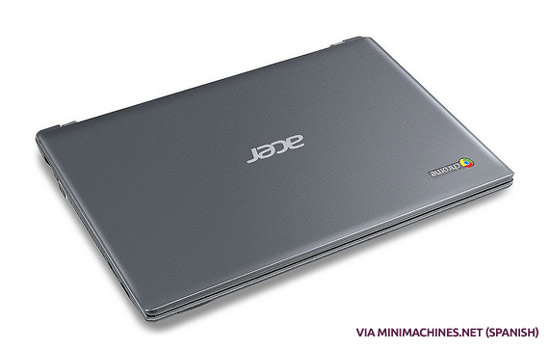 Rumours that Acer were gearing up for another crack at the Chromebook market were circulated back in September with an expected release date of ‘October’.

The rumour was surprising given sales of their first Chromebookd, the Acer AC700, had been, as one Acer rep told us, ‘incredibly disappointing’.

We do know that the AC710 will have an 11.6″ screen, but beyond that nothing has been formally confirmed. One would expect it to follow in the footsteps of the Samsung Series 5 rather than the Samsung ‘Series 3’.

I doubt we’ll be seeing this sporting an ARM processor or luringly low price-tag.

Excited for it? What would it need to have to persuade you?

Google Search Gets a Design Refresh
Read Next