In the four months since the first set of Android apps were added to the Chrome Web Store a further fourteen have appeared — but which apps are proving most popular with Chrome OS users?

Ahead of the next set, which may include the likes of Flipboard, Kindle, Viber and Facebook Messenger (based on apps recently tested by Google), I thought it would be useful to take a quick look at the most installed Android apps for Chrome out of the eighteen currently available.

Before we begin let’s address the obvious “issue”, the complaint that’s raised every time Google brings a new batch of Android apps to the Chrome Web Store: the lack of “well known” or so-called “popular” apps.

But it’s easier said than done as there are huge technical hurdles to be cleared in getting software built for a mobile OS running in a browser add-on.

Plus, Android apps can be complex, using additional libraries, system components and APIs not (yet) available in the “Android Runtime for Chrome” plugin. Then there’s testing, QA and minor fixing needed before Google can (or will) add something to the Chrome Web Store.

Finally, not all developers will be interested in supporting the feature, while others will be content to provide native, cross-platform Chrome Apps instead. 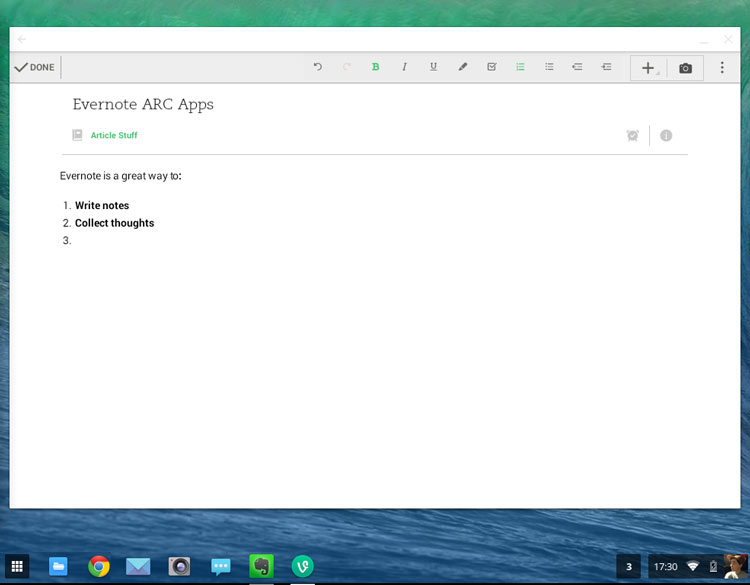 Evernote. It really doesn’t need an introduction, does it? This powerhouse of productivity potential is now practically a byword for ‘getting things done’!

‘Evernote can be as simple or as complex as needed’

Considered both flexible and learned by its fans, Evernote can be as simple or as complex as needed. Use it like a notepad or a jotters journal or turn it into a comprehensive referenced catalog of notes, snippets, web clips and research.

The Evernote Android app for Chrome is largely on par in features with both the web app and the ‘regular’ mobile app on iOS, Android and elsewhere.

There’s no denying that most Android apps feel quirky when being used with a mouse or trackpad, and for a text-heavy app the ARC plugin’s text rendering isn’t ideal, with the blurry appearance annoying many. Evernote for Chrome is also prone to crashing when adding a screenshot or attempting to take a webcam photo.

Not that any of that is putting people off. Evernote is currently the most installed Android App for Chrome with a catalog of more than 160,000 users — file that under ‘wow’! 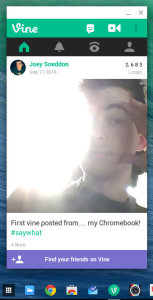 Vine is Twitter’s semi-successful attempt at creating a short, loopy video version of YouTube. Although not as widely used as Instagram’s video feature its distinct branding has helped it amass a hardcore base of fans and ‘looplebrities’. It helps that vines — little six second clips — can be embedded on Twitter and “revined” by other Vine users.

While the Vine app for Chrome lags behind the main Android app, lacking some of the newer features, all the essentials are here: recording, uploading, viewing, commenting, liking and resharing.

For more information on Vine for Chrome or to install it head to the Chrome Web Store listing by hitting the link below. 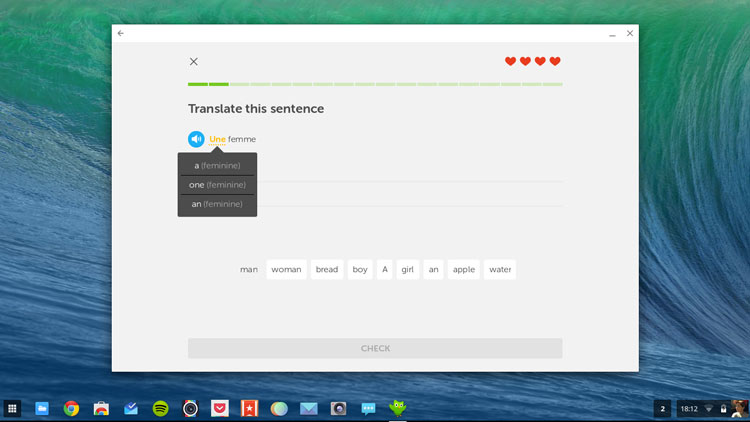 Learning a new language used to require time, patience and either some expensive computer software or an incomprehensible workbook and CD of badly acted scenes taking place in bakeries and bus stops.

And then along came Duolingo, a mobile app that modernised language learning aids. Although some would argue that it still works best when used to compliment traditional language teaching methods, it can be —indeed, is— used by itself.

Major languages, like French, German and Spanish (and for non-English speakers, English), are covered by Duolingo, with interactive lessons, memory games, translation tasks and other richly immersive exercises.

Although I personally have yet to use it (it recently added Swedish, so I’ll be diving in shortly) the acclaim and personal recommendations it has are testament to its quality.

Whether you want to expand your Spanish vocabulary or refresh your French before a vacation, the Duolingo Android app for Chrome is the best free language-learning experience available on a Chromebook. 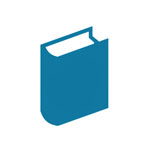 The world’s most popular eBook and audiobook lending library requires a valid account with a participating school or education library (places where Chromebooks are already popular, perhaps accounting for its high placing).

The app is “open” for lending 24/7, and borrowed titles — of which there are more than 300,000 to choose from — are automatically returned.

For more information, and to find out whether your school supports the service, head over to the official website. To install OverDrive on your Chromebook head to the Web Store link below.

As great as Google’s ‘Gmail Offline’ app is it takes some getting used to and, understandably, only supports one webmail service: Gmail.

CloudMagic features include support for multiple accounts. That means you can receive, send and manage mail from multiple Google aliases, as well as your Outlook, Yahoo! and other webmail all in one app, no need to have multiple browser tabs open.

Free tier users are limited to adding five accounts, while those on the service’s newly introduced ‘pro’ plan can add as many as they like.

The rankings above are based on the reported numbers of users each app as listed on the Chrome Web Store. These figures are accurate at the date of publishing.

Home » Android » These Are The Most Popular Android Apps for Chromebooks 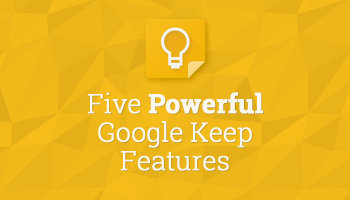 5 Features of Google Keep You Should Start Using
Read Next