Jeff Bezos is a snowy white beard and an arctic fulfilment depot away from being crowned a living Santa Claus, with his Amazon retail empire once again placing itself at the centre of holiday shopping in the US.

In a press release pushed out on December 26, to highlight its successes during the festive period, Amazon says it saw a big increase in the number of Prime trials being taken, a big bump in the number of people shopping from its mobile apps and, to sweeten the acerbic reception that greeted its ill-fated Fire Phone, big sales for its own-brand TV streaming devices.

Chromebooks Out On Top (Again)

But hidden down amongst the bullet points and back patting is good news for Google: Chromebooks made up the top three best selling computers on Amazon over the holiday season.

The top seller was the 11.6-inch Acer C720, followed by the (cheaply priced) 13.3-inch ASUS C300 Chromebook (which dipped well below $199 in the run-up and is available in an assortment of colors).

The second-generation HP Chromebook 11, based around a Samsung Exynos CPU with 2GB RAM, placed third.

The sales figures below cover purchases made between November 1 and December 19, 2014.

Last year Chromebooks made up two of the top three positioning, with the Samsung Chromebook placing 1st, and the Acer C7 device placing 3rd.

There was silver-edged news elsewhere for Google.  Buoyed by plenty of offers, incentives and discounts ahead of the main Christmas shopping period it’s perhaps not surprising to learn that the Chromecast remained a big xmas seller, albeit placing second to Amazon’s $39 ‘Fire TV Stick’.

The latter, launched in October, is now the fastest-selling Amazon device ever.

With CES 2015 now nearby, expected to play host to a swathe of new Chromebooks, including a 15.6-inch Acer model, a Rockchip-based device from Lenovo priced at $170, and new ASUS models powered by Intel Broadwell CPUs, chances are that the successes gained this month are only going to continue into 2015. 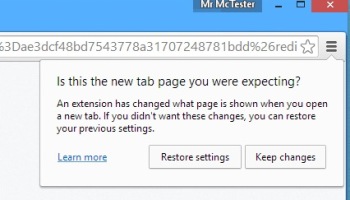 Is This The Chrome New Tab Page You Were Expecting?
Read Next