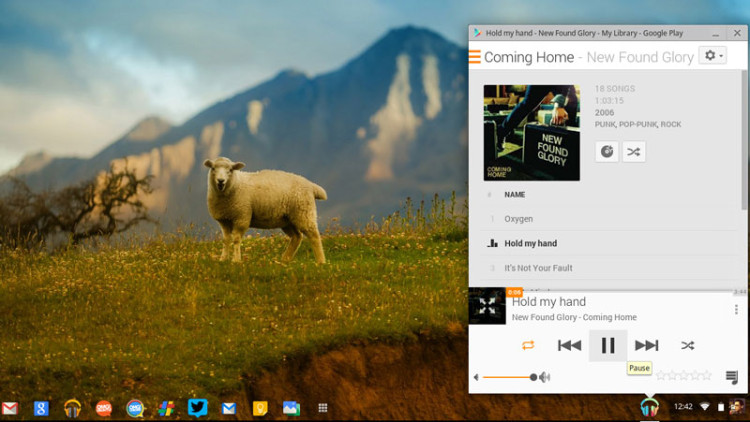 Google Play Music is great. No matter where you are or what device you’re on you can fire up a web-browser and start listening to your music library.

But that’s also what makes it not quite so great; you’re forced to keep a browser tab open at all times. The moment you close it your music stops.

With recent releases of Google Chrome has come a new feature called ‘Panels‘. Panels allow applications to run in docked mode, free from the browser.

The third-party Google Play Music Panel app lets you listen to your music library without needing to keep Chrome open. It sits docked and out of the way at the bottom of your screen, and when left maximized appears above other windows.

As it is, essentially, a modified version of the Google Play Music website (albeit with some rather natty custom css to make it work in a smaller window) almost all of the features you’d need are supported – including track rating, searching, playlists, and player controls.

Until Google release a semi-native version of Google Music using their packaged app technology (on the way) this is sort of the next best thing!

The app can be downloaded for free from the Chrome Web Store.

The extension will work on other operating systems, so long as the ‘Panel’ flag is enabled.