It’s turning out to be quite the week for Chromebooks. Yesterday Toshiba made a pair of upgraded 13-inch Chromebooks official. Today HP is getting in on the fun with a few announcement of its own.

HP has unveiled new versions of its Chromebook 11 and Chromebook 14 laptops at the IFA tech expo in Germany.

Details of the former, smaller Chromebook 11 have been public for some time. It switches the tired Samsung Exynos CPU out for a more capable Bay Trail-based Intel N2830. This is paired with 2GB memory, 16GB SSD and the usual smattering of ports. Pricing for it will start from $279.99 when it hits the states early next month.

But the upgraded Chromebook 14 has come as a bit of a surprise. 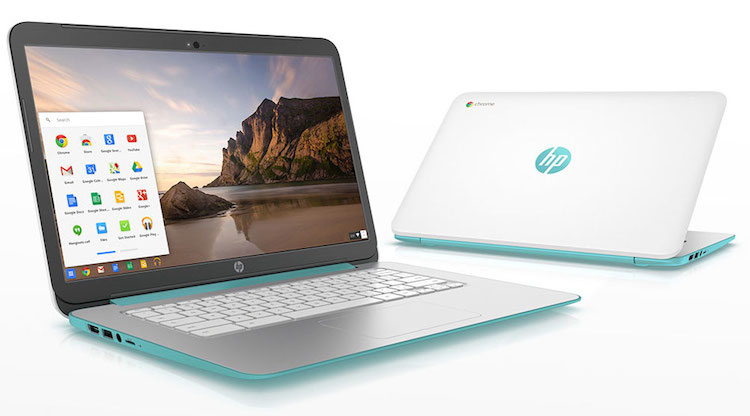 HP has followed Acer’s lead and kitted the new Chromebook 14 out with the powerful Nvidia Tegra K1 processor. But unlike the Acer devices, which are available in both HD and FHD versions, the new HP, according to the device listing page, sticks with a standard screen resolution of 1366×768 on its large 14.1-inch screen.

(It should be noted that the press release states otherwise, touting: “…super-fast performance and a wide 14-inch FHD diagonal screen for a superior Chrome experience.”)

A touch screen model is expected to follow later in the year, PCWorld’s Melissa Riofrio reports.

The device is fanless, a tiny 0.7-inches thick when closed and weighs a light (for its size) 3.75lbs.

HP say it will be available in two body colours, ‘Twinkle Black’ or’ Snow White’, with a choice of colourful accent options, including Smoke Silver, Sorbet Orange, Ocean Turquoise or Neon Green.

Like the HP Chromebox, the device is also ‘optimised’ for Google Hangouts. It has a tentative battery life of around 9.25 hours.

Pricing will start from $299.99, which is a smidgen more expensive than the entry level Acer Chromebook 13, but for the extra few dollars you are getting a bigger screen.

HP says a 4G model offering ‘life time broadband’ (for the life of the product and capped at 250MB/m) will also be available from around $350.

For more details hit up the product page listing for the new device on the company’s website, or check out the press release.

The new Chromebook 11 hits US retail on October 5, a fortnight ahead of the Chromebook 14, which is due to land in stores by October 22.