LG have announced a new all-in-one ‘Chromebase’ device ahead of its official unveiling at CES 2014 next month.

The LG Chromebase will be LG’s first Chrome OS device and the first such all-in-one desktop computer to feature Google’s operating system.

The new device isn’t holding back on hardware either. The Chromebase will feature a 21.5-inch IPS monitor with a 1920×1080 resolution that “delivers accurate color reproduction, stunning contrast and an impressive 178-degree viewing angle.” The Chromebase will also have a 1.3 megapixel webcam capable of 720p output and a microphone for video conferencing.

The Chromebase will come with a Haswell-powered Intel Celeron processor, 2GB of RAM, and 16GB of SSD storage. It also sports the following ports:

The press release also mentions a keyboard, mouse, and “cable organiser” are included though none of these have been ‘shown off’ yet.

LG plan to have the new Chrome OS device on show at CES 2014 from January 7th to the 10th.

Aside from the full HD resolution IPS monitor, most of the specs fall in line with newer Chromebooks with the same Haswell-powered Celeron processor line and even the same amount of RAM and solid-state drive capacity. This announcement comes after LG filed patents for various names – none of which were “Chromebase” oddly enough – in October. 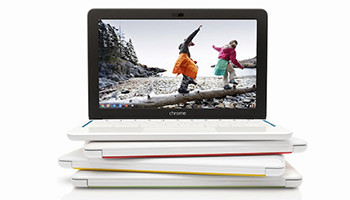