Do you use a desktop Twitter client? If you do then there’s probably one very good reason as to why: notifications.

Twitter Notifier for Chrome brings all the benefits of using a traditional desktop app to the browser, and none of the bloat.

You can tweet, retweet and reply; you can view your timeline, mentions and messages; and you can search, follow and manage lists, too.

Image uploads and link shortening are supported, while viewing other replies to a tweet requires nothing more than a double-click on it.

I’m fairly cautious when it comes to entering my passwords in add-ons but I was pleased to see that this extension, unlike a number on the Web Store, uses OAuth to connect to Twitter. This means that you do not need to enter any user details into the extension itself.

After authorising an account to work with the add-on you can click on the extension icon in the toolbar to open the pop up. Click the lower-left hand button to enable “pop-out” mode and run the extension on the desktop.

Using the app in either mode is the same, and navigating around is fairly straightforward: 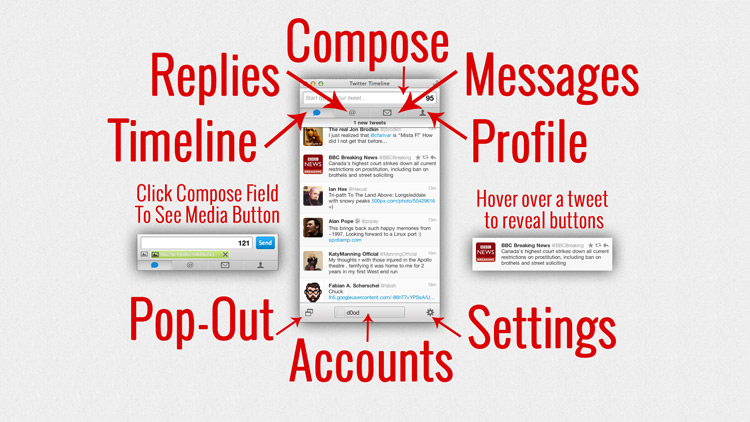 By default the add-on delivers notifications for all activity – including new tweets. If you follow a lot of people (and let’s face it, you’re on Twitter so chances are you do) this fast gets annoying.

Thankfully the developer has implemented fine-grained controls so you can decide what sorts of pop ups should bug you, what should stay on screen until dismiss, and what sorts of updates should be ignored entirely! 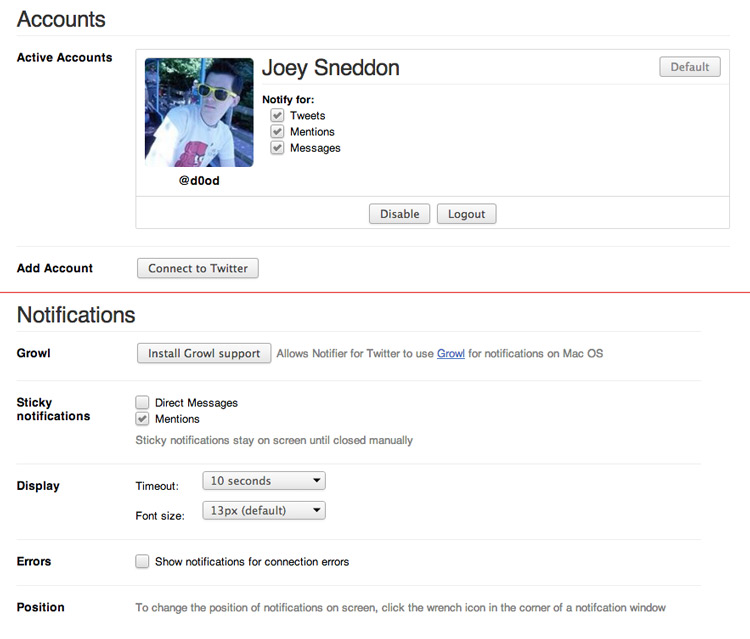 As mentioned earlier in the article, this app covers all of the basic Twitter functions such as replying, retweeting, sending direct messages and uploading media. Conversations can be viewed by double-clicking on a tweet. Links and images open up in a new background tabs.

There are features missing, however. There is no auto-complete for tags or usernames, nor is there any way to view trending topics. Avid image uploaders should note that there are no media upload service or URL shortening options available. If you prefer sharing through Twitpic or Img.ly than Twitter’s own pic.twitter you’ll need to go elsewhere.

In active use it sat on around 70MB of RAM (according to the Chrome Task Manager) which, compared to the average open tab that uses more than double that (including the Twitter website), is pretty good going.

Twitter Notifier is a free extension available direct from the Chrome Web Store.