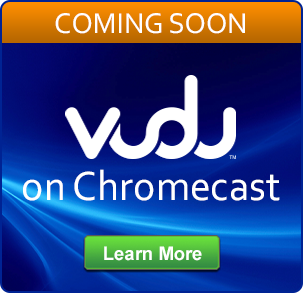 Support for Google’s Chromecast continues to go from strength to strength as another major media company announces plans to support the tech in the near future.

US online video streaming service Vudu, owned by Walmart, has said it intends to allow wireless streaming from its Android and iOS devices to the Google Chromecast in an upcoming release.

It is already possible to ‘cast’ content from the service through a desktop browser to a TV using the official Chromecast extension.

Vudu offers a wide range television shows and films for rental and purchase, including a more films available to stream in ‘full HD’ than rival services Netflix and Amazon Instant Video.

While the company are yet to give a firm date for the release of Chromecast-enabled apps they have opened a beta testing programme to the public.

Following the launch of the Chromecast SDK last month the number of apps supporting the technology has exploded. And there’s no sign of this slowing down soon, with music streaming services Rdio and Beats Music among a number of high-profile companies rumoured to be planning to add Chromecast support to their apps in the near future.