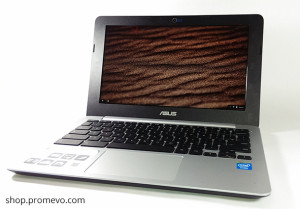 More details on the ASUS Chromebooks are starting to seep out as it creeps closer to its tentative release date this May.

The latest info on the the 11.6-inch C200 model comes courtesy of Ohio-based certified Google reseller Promevo, whom ASUS has gifted a model ahead of formally releasing it to retail.

Perhaps unsurprisingly given that their business is centred around selling Google products, support and hardware, their review of the notebook is largely positive, noting:

“It easily fits in the palm of the hand and is very light. ASUS’s decision to use the Bay Trail processor means excellent power efficiency without compromising performance.”

To back performance claims up the team ran a quick benchmark on it using Google’s Octane utility. It scored a fairly respectable 7,387. This compares favourably when stacked against the Toshiba 13 and ARM-based HP 11 Chromebooks, which are reported to hit 10,400+ and 5,300+ respectively.

While there is a performance trade off it’s not going to be one that’s hugely noticeable. But what it might lack in speed compared to its rivals it makes up for in battery life, as Promevo go on to note:

“Battery life is a crucial factor …the 10 hour battery life of the ASUS C200 is unbeatable in it’s class. We used it on battery power the whole work day and still had power left to spare at the end of the day.”

The store concludes that the extended battery life, thin design, performance and low price combine to make the C200 a ‘strong competitor’.

With prices starting from $249 in some places, it looks like the ASUS C200 could end up being the best all round performer. Hopefully details on its bigger brother, the 13.3-inch C300, aren’t too far behind. 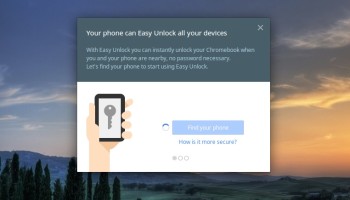 Coming Soon: Unlock Your Chromebook by Putting Your Phone Near It
Read Next