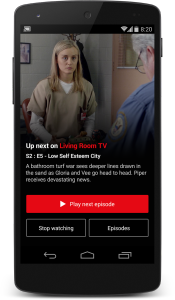 Netflix is rolling out Post-Play functionality on Chromecast through its Android and iOS applications.

Post-Play indulges binge watching by letting successive episodes of the same TV series play back-to-back — no need to get up off the couch or manually select the next item.

An updated version of the Netflix mobile app with the feature turned on has been pushed to the Apple and Google Play stores and is required to make use of the feature.

Post-Play has been my own favourite Netflix feature for a long time. As one episode ends a preview of the next episode pops up on screen. This offers 15 seconds in which one can choose to cancel or, by letting the prompt time out, play what’s next automatically.

The feature, which was introduced to the Android app earlier in the year, works a little differently on Chromecast. When the end of a streamed episode is reached it gives you 30 seconds rather than 15 in which to grab your smartphone or tablet to stop playback or sit back and do nothing for the show to go on.

For PC users Netflix say support for Post-Play through the browser ‘will follow soon.’