We often hear from agitated users having issues with their keyboard media keys not working in desktop apps when the Chrome browser is running.

So what’s going on? Well, their batteries have not run out, and there’s not a kink in their system.

The feature allows Chrome Apps and extensions, be they media players or toolbar add-ons, to have a specific keyboard shortcut or button assigned to them. Tap the shortcut and the extension appears or the window opens or the track plays, even when Chrome isn’t in focus.

It’s a great feature on the whole, one that makes the new Google Play Music Player so handy. It puts album art and controls on the Windows, Mac, Linux and Chrome OS desktop. But it doesn’t need to be visible to respond to presses of media/F7-F9 keys.

According to the Chrome Web Store listing more than half a million people use this one app alone — so that’s a lot of people who may find themselves wondering why iTunes or Spotify don’t respond to media key presses when Chrome is running.

Thankfully there are a few ways to solve it if the behaviour isn’t one you want.

You can set to the keyboard shortcuts to work only when Chrome is in focus: 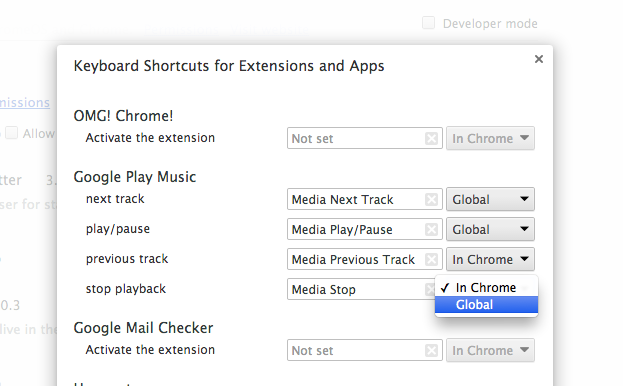 You can disable/remove the app/extension from Chrome entirely too:

If you don’t find Google Play Music in the list it might be a different extension or web app that’s hijacking your keys, so go through each one in turn to

This post is part of our Handy Helpers series, covering small tips and fixes for common problems in Chrome.

How To
#handy helpers #keyboard

Corey Surtees That background tasks check box is BS indeed. I suppose…
Stop Google Chrome from Running in the Background on Windows