Black Friday is once again upon us and the deals for Chrome fans are as plentiful as ever.

The best deals this year don’t all require queuing up in the middle of the night or even waiting until Black Friday. If some of the deals below don’t quite strike your fancy, traditional brick-and-mortar and online retailers are holding online sales throughout the week, including Amazon and Newegg. 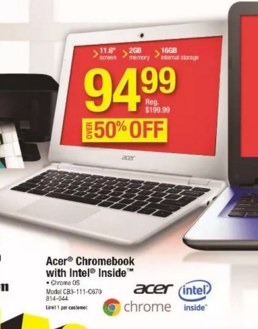 The 11.6″ Acer CB3-111 has been out since this time last year. The device includes a standard 2GB of RAM, 16GB eMMC flash storage, and a 2.16GHz Intel Celeron processor.

Office Depot and OfficeMax are selling the device for $94.99, but it’s also available for $99 if you only have a Best Buy nearby.

The CB3-111 originally retailed for $199 and currently retails for $169, but as far as deals go, it’s hard to go wrong with a Bay Trail device coming in a few dollars shy of a C-note. 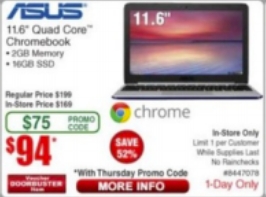 Another in the $94 range is an ASUS Chromebook with 2GB of RAM and a 16GB SSD from Fry’s. It appears to be the ASUS C201 which runs a quad-core Rockchip ARM processor with respectable performance benchmarks and a stellar 13 hour battery life.

If you’re tempted, be sure to sign up for Fry’s email newsletters on their site to get the promo code for the in-store discount on Thanksgiving Day. 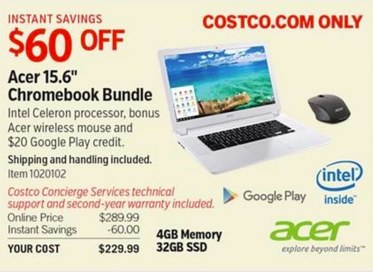 Costco is offering an online-only deal for the Acer C910 with a roomier 4GB of RAM and 32GB SSD than the 11.6″ models being offered above. The C910 comes with either a 1366×768 or glorious 1920×1080 IPS screen, but commenter Kekkel contacted Costco customer support who confirm it’s, sadly, the former.

To sweeten the deal even more, you’ll also get $20 of Google Play credit and an Acer wireless mouse.

So you’ve got your eye on a TV instead and need a streaming stick or maybe you’ve just built a new PC and wouldn’t dream of replacing it. Either way, there are a few Chromecast deals this year on both the Chromecast and Chromecast Audio.

If you’ve been waiting to grab a new Chromecast, it’s a great opportunity to get streaming on the cheap and make using your fancy speakers even easier.

If you’re a Costco member, you can grab a two pack of Chromecasts with $6 of Google Play credit per device for $20 off the usual $68.99 price tag.