Hoping to nab a shiny new  Samsung Chromebook 2 later this year, but also minded to save money in the process? It seems Samsung has you covered.

Though not part of the official release announcement earlier this year, a 2GB RAM version of the eight-core Samsung Chromebook 2 is listed for purchase on the Canadian version of the company’s website. At the time of their reveal Samsung only made mention of 4GB versions, so this comes as a small surprise.

Its addition indictates that Samsung will be positioning it as an entry model, partly in an attempt to wean buyers off of 2012’s cheaper, but slower, dual-core Exynos 5250 version, and partly to counteract the cheaper (and allegedly faster) Intel-based Chromebooks also sporting 2GB.

Other than a drop in memory, the rest of the specifications are identical to the other 11-inch model. 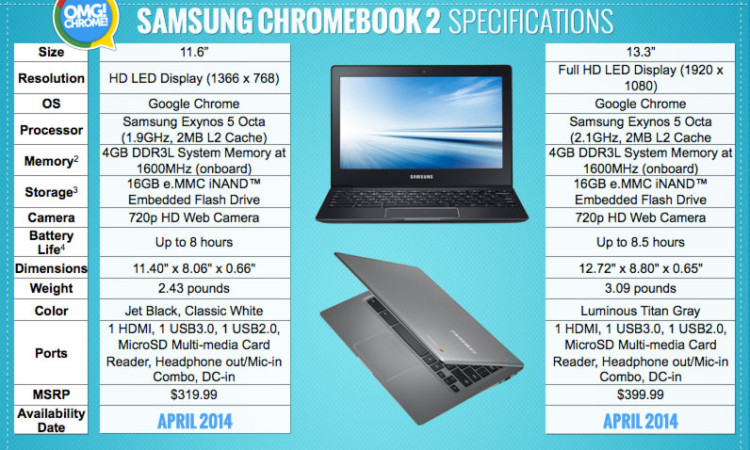 It’s not yet clear where or when the 2GB model will launch, but its arrival brings the total number of Samsung Chromebook 2’s to five:

The question will be how much cheaper the 2GB variant turns out to be and whether that cost will offset the (likely) drop in performance over a 4GB model. Chrome OS likes RAM; the more RAM available, the more seamless multitasking will be.

For a drop in potential performance the price differential will need to be pretty tempting for me.

Thanks to Wesley Files