The browser update will be pushed out to existing users through the Google Play Store ‘over the next few days’, say the Chrome team.

Alongside the usual soup of security and stability fixes are a few notable ‘user facing’ changes.

For example, the ‘Help’ section no longer opens in a new tab but as a separate view headed up by its own action bar. A small change but one that gives the help section a distinct feel in addition to adhering to Android’s Holo styling.

While unlikely to affect most users, files downloaded through the Chrome Network Stack now display progress information through the Android notification shade; and the browser is now able to render the “data list” HTML5 tag (see screenshot).

On the bug squashing side a crash when opening a context menu ‘without a default search engine’ is among the issues to have been solved.

Google Chrome for Android is a free download available from the Play Store. 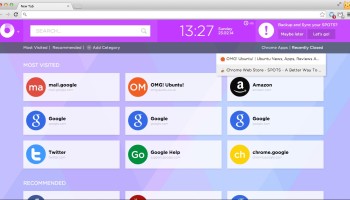