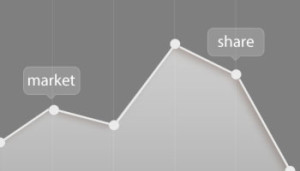 As we head towards the end of another month analytics companies will be preparing their latest sets of browser share statistics.

But before we concern ourselves with a month that’s not yet through, let’s recap the browser marketshare on the desktop for March.

According to ‘leading analytics company’ Net Market Share  Google Chrome managed to inch its internet share up by more than half of a percent, jumping from 16.84% in February to 17.52% in March. The swing appears to come from Internet Explorer (down 0.23% to a smudge below 58%) and Firefox, which fell 0.42% in the same period to 17.26%.

By contrast, another ‘leading analytics company’ StatCounter, reports a marginal drop for Chrome during the same period, reporting that it fell 0.19% to 43.66% — its lowest position since the start of the year.  Internet Explorer sits behind it on 22.58% (no change) followed by Mozilla Firefox with 18.75% (19.24%).

As always these stats don’t truly represent anything other than visits to sites they contain their tracking codes. But, when viewed together, they give us a taste of how things stand.