It’s been a long time coming but Chrome OS is to finally gain support for adding bookmarks to the application shelf and launcher.

At present users have to to manually create an “application shortcut” to launch their favourite websites quickly.

But change is on the way. Tentatively scheduled to arrive in Chrome OS 34, users will be able to drag and drop URLs from the address bar to the Chrome app launcher and app shelf to create a shortcut.

Discussions are continuing on how best to create an ‘icon’ that fits in with the rest of the Chrome OS desktop.

Stretching a teeny, tiny, pixelated website favicon to fill the standard tile size isn’t preferable, so Chrome’s developers are exploring other options. At present they’re favouring favicon images being placed in the centre of a “rounded rectangle with a strip of the app icon’s dominant colour [along the bottom]”.

Because of the cross-platform uniformity offered by the Aura shell (used on Chrome OS, Windows and, soon, Linux) there’s a good chance non-Chromebook owners will also benefit from this change in due course.

In the meantime I can’t help but find it ironic that a feature involving ‘shortcuts’ has taken so long to be worked on! 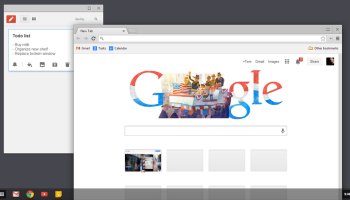