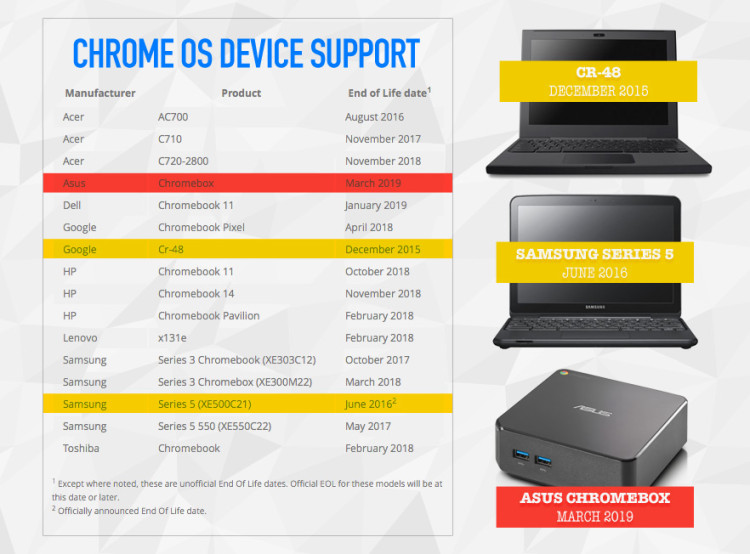 Google has announced that it is extending the support period for Chrome OS devices to a minimum of five years from release.

The revised ‘end of life’ (EOL) dates means that the majority of Chromebooks released so far will benefit from an extra year of OS updates than  was originally planned.

Google say that even these dates are, for all but one device, the Samsung Series 5, simply the ‘earliest’ at which support will be retired. Official EOL dates could be extended further in the future.

The bump means that even the original reference device, the Cr-48, will manage to achieve a full five years of updates. An estimated 60,000 Cr-48s were given away for free by Google in 2010 as part of a pilot programme to ready the OS for mainstream release.

How Long Is Your Chromebook Supported for?

The majority of Chrome OS devices, including the Samsung Series 3, 5 and 550, are now looking at receiving five years of updates from their original release. This is roughly around the same amount of time that Microsoft provided mainstream support to Windows Vista users, and a good half year longer than that Apple offers with an average release of OS X.

It’s not just the notebooks getting renewed support. The original Samsung Chromebox, three models of which were released between May 2012 and March 2013, now have a tentative EOL date of March 2018 which is up one year from the 2017 cut off date previously given.

The Samsung Series 5 is the only notebook to have a guaranteed EOL date so far. Updates for the dual-core device will stop funnelling down in June, 2016. This is up five months from the January 2016 EOL previously given by Google.

Expected EOLs for newer devices, such as the LG Chromebase and Lenovo N20p, are yet to be released.

What happens after a device reaches EOL? Well, it will still function, it just won’t be updated with security fixes and new features. Considering the explosion in Chrome devices over the past 2 years alone, it just wouldn’t be feasible for Google to support every device long past their prime.

But would you really want to still be using a single core Intel Atom chip in 2016?

For less than $500, you get an up-to-date device for at least 5 years. It might end up sucking harder than an ancient Packard Bell trying to load the Yahoo homepage, but it’s mildly reassuring at least.