Currently, the minimal new tab page extension for Google Chrome, has been quietly improving its feature set over the past few weeks.

Currently is a free Chrome extension that puts a colorful clock and four-day weather forecast in each and every new tab you open. Hover over any of the forecasts to see a text bubble telling you of the expected conditions.

We first reviewed the add-on all the way back in 2012. Since then it has snowballed in popularity, notching up over 200,000 installs.

A big update, dubbed ‘Currently 2.0’, began to roll out on the Chrome Web Store earlier this month. 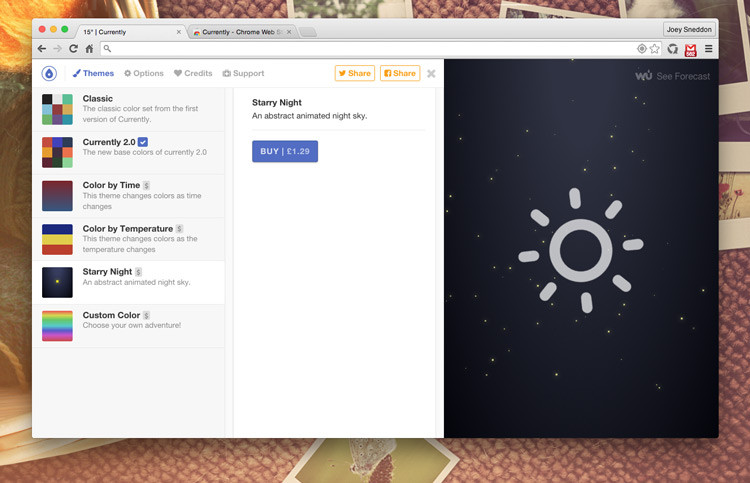 Earlier this month the team behind the add-on launched the biggest update yet. The layout was given a tweak, the iconography and font adjusted and a new default color scheme introduced.

More notably is the introduction of new themes, four of which are available as in-app — or should that be in-tab — purchases priced at £1.29 each. Transactions are handled by Google Wallet so are secure.

The four paid themes are:

These join the new (and older) default theme.

Design tweaks aside everything else in the add-on remains as it was and without cost. You can choose which location weather is shown for, the temperature unit displays, and whether the clock should show ‘seconds’.

Currently is an extension for Google Chrome and available for free from the Web Store.

Currently on the Chrome Web Store