The upcoming 15.6-inch Acer C910 will be the first Chromebook of its size to go on sale, but if a new report is correct, it won’t be alone in the position for long.

Taiwanese tech industry weblog Digitimes claims that Dell is prepping a 15.6″ Chromebook for release in the first half of 2015.

Their source for the claim comes, as always, from the ‘upstream supply chain’ and suggests that both Dell and Acer devices could arrived “priced under US$300”. The purported 15.6-inch Dell Chromebook will boast similar specifications to the Acer model, including the use of an Intel Broadwell-U processor whose performance is on a par with a Haswell Core i3 chip.

Quite how ‘similar’ they’ll be remains to be seen. Dell could steal a march by offering a slightly better set of screen options. As we reported earlier in the month, the Acer C910 will offer (initially) two non-glare display (read: no IPS) options at standard HD (1366 x 768) and full HD (1920 x 1080) resolutions.

The most interesting part of the (often derided) site’s claims are on price and positioning. Google is said to be aiming for a sub-$300 price point for the new crop of super large Chromebooks, and will launch them just in time to take on a new raft of cheap ‘Windows 8.1 with Bing notebooks’ which won’t, conversely, be available in such a large form factor.

CES 2015 could possibly offer our first glimpse of this, the Acer and other upcoming Chrome OS devices. Thankfully, there’s not long to wait now… 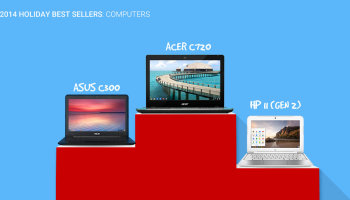