A brand new default wallpaper based on Google’s Material Design language is gearing up for roll out to all Chromebooks and other Chrome OS devices — but you can get it early, if you like.

Based on Material Design, it’s wonderfully angular, keenly coloured and has a fantastic paper fibre texture up close.

But you don’t have to wait to see it for yourself. Chromium developers have uploaded a zip file containing the new wallpaper (in 1x and 2x resolutions) to the issue tracker overseeing the switch.

The archive also contains a desaturated variant as a proposed alternative for the Chrome OS guest session. Though comments on the bug suggest the guest session will continue to stick to its plain sandy drape for the time being.

When and How and Why?

It’s possible that when the new Material Design wallpaper rolls out — precise date of which is unknown — it will override any alternative or custom designs you might have set yourself. If you own a device that ships with a custom OEM wallpaper you’re unlikely to be affected.

Why the need for a new default desktop background? While few folks stick with the default offering the choice of wallpaper is still an important one. As the first thing new users see on boot, it needs to make a bold first impression.

Android 5.0 ‘Lollipop’ features a similar ‘real world’ motif to its default background. Chrome OS tying in, however subtle, is an important way to echo the seamless transition in UI and UX that Material Design offers developers.

Enough waffle; you can grab a zip file containing the new wallpaper from Chromium code directly, or nab the individual one matching your resolution from an imgur link below: 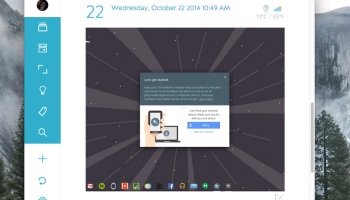