Are you a fan of the Chrome app launcher on Windows, Mac and Linux?

Well, I hope you aren’t; I’ve some bad news for you: Google is axing the Chrome App Launcher.

Yep, the box-y launchpad housing all your web-app and Chrome app shortcuts is being ditched — or ‘retired’ in Google speak — from desktop builds of the browser in July.

The search giant cites low use for the decision to axe it, though the effort to prune the desktop browser of superfluous features as part of ‘project eraser’ has likely played a part too.

The app launcher will now exist exclusively on Chrome OS.

“The removal process will take place over the next several months,” Google say. “…in a few weeks, Chrome will no longer enable the launcher when users first install a Chrome app”

All existing instances of the launcher will be removed in July.

Latest Feature To Get The Chop 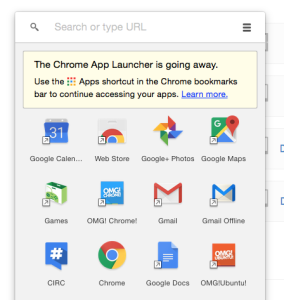 Last year to retire the Chrome Notification Center from non-Chrome OS platforms, a move many said was a sign of Google paring back its ambitions to ‘Chrome-ify’ other platforms.

The Chrome app launcher for Windows, Mac and Linux has lagged behind its Chrome OS sibling for some time.

The latter sports a new look with Google Now card integration and support for creating and arranging folders. The former… Well, the exact features depend on your OS — the Mac launcher has never been able to create folders, while the Linux version regularly vanishes.

The move will also bring further relief to Mac OS X users, many of whom have grown tired of finding Launchpad stuffed full of app launchers.

Will you miss the Chrome App Launcher?