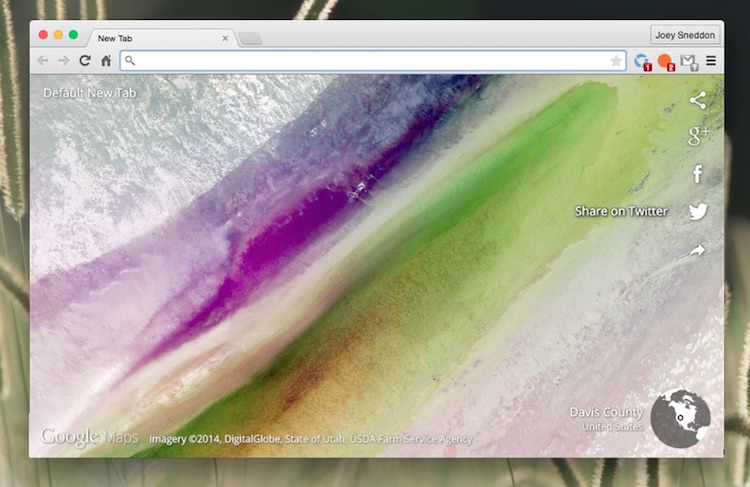 A minor update to Google’s stunning Earth View add-on for Chrome is now rolling out on the Web Store.

The extension, which was launched last month, transforms every new tab with breathtaking aerial backdrops pulled from Google Maps’ vast database. The location of the shot on show is displayed in the corner.

Version 1.6.5 of “Earth View from Google Maps” (to credit it in full) makes some minor improvements.

On mouse over, you’ll find a new link to open the ‘Default New Tab’  page in the top left-hand corner (replacing the ‘Apps’ link in the previous release) and a new share icon in the upper-right that unfolds social network sharing links when clicked.

My first assumption when seeing the social sharing features was one of enthusiasm. “Sounds like a great way to share awesome images Google Maps throws my way,” I thought.

Rather than sharing information on and/or a link to the location of the image you’re viewing, you’ll instead be sending a promotional blurb suggesting that your followers and friends “Try the Earth View Chrome Extension” for themselves.

Still lacking is support for accessing the Bookmarks Toolbar when set to only show on NTP, and though marginally improved in this update memory usage continues to snowball each time a new tab is opened — upwards of 350MB — and continues to sit on it until the browser is closed and reopened.

Update at a glance: