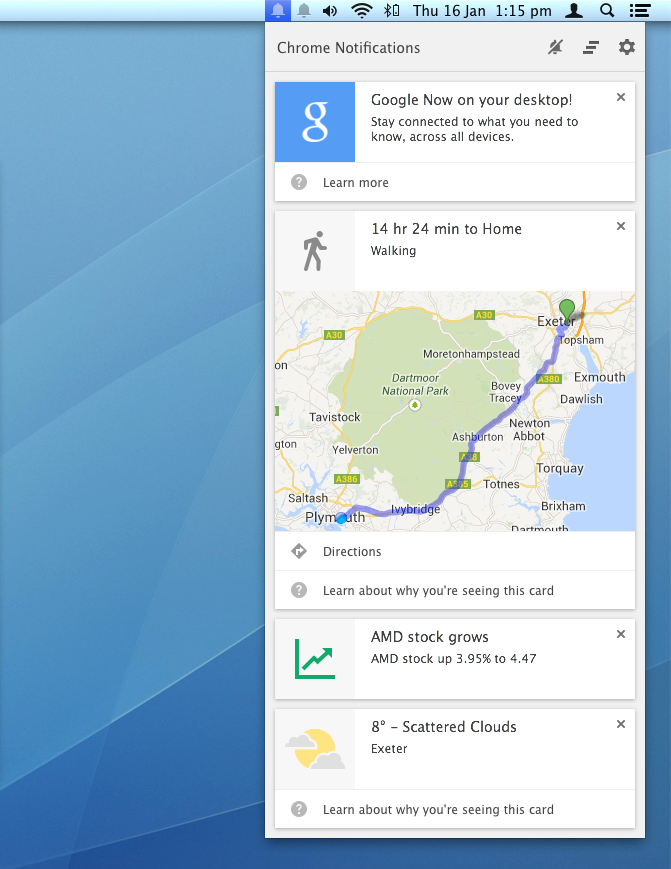 We’ve spoken a lot about Google Now over the last few weeks, but to try it out you had to be running a development build of Chrome or Chrome OS.

But, as of today, Google Now support is rolling out to users on the Chrome Beta channel, ahead of its arrival in Chrome 33 Stable later next month.

To use Google Now  on the desktop you must also have the feature set-up and configured on an Android or iOS device using the same Google Account as the one in Chrome.

If you’re running Android 4.1 or above then Google Now is included by default (though it requires you to opt-in).  iPhone, iPod and iPad users will need to install the Google Search app from the iTunes App Store.

Not all cards are supported in Chrome as of writing, but stocks, weather, travel information and event info have, for me, all appeared in the notification centre at one point or another.

Cards don’t yet sync across devices, and cards using location data use the last reported location from your mobile.

Google Chrome Beta is available for Windows, Mac and Linux, though Google Now is only currently available on Windows and Mac. As this is a ‘beta’ quality build bugs and issues should be expected. Also note that installing it will replace any existing installation already on your computer – you’ve been warned!

For a safer way to play with new features ahead of time try the Canary channel.