Bored of running Chrome OS on your Acer C720 Chromebook? Want to turn it into a ‘hackintosh’ Mac Laptop?

Well, now you can.

CoolstarOrg, a genius at getting other OSes up and running on Chrome OS hardware, has written a detailed guide on how owners of the Acer C720 can install Mac OS X 10.11 ‘El Capitan’ on their Chromebook.

A timely “hackintosh” report, all told. It was just over a year ago that we reported on CoolStar’s effort to get OS X 10.9 Mavericks up and running on an the exact same Chromebook.

Sure, there are caveats and practicality issues, but it’s a great case of “…because why not?”.  Chromebooks are basic Intel-based PCs: they can run Linux, they can run Windows, so it’s no surprise that they can also run Mac OS X.

You will need an Acer C720 with an Intel Core i3-4005U and 4 GB RAM to follow along, as this chipset is the one most compatible with OS X (requiring only a few minor tweaks).

Don’t expect miracles once you’ve jumped through the required hoops, either. Trackpad scrolling is described as “poor and choppy”, and hackintoshers report patchy Wi-Fi issues.

Check out Coolstar’s full guide over on Reddit, and bookmark this page of his website for further details.

How To acer c720 apple chromebook hacks i3 chromebook 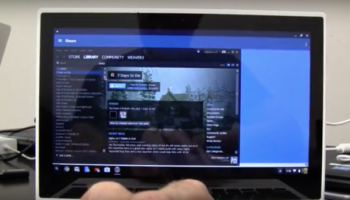 Want to Install Windows Software on a Chromebook? You Soon Can
Read Next