The device listed on several sites, including Provantage and NeoBits, sports the model number XE500C12-K01US and is marked as ‘on order’.

Some sites list the colour choice as “metallic silver” which suggests that this isn’t a quick SoC swap of the Octa-based Chromebook 2, but an entirely new device altogether.

If this listing is, as pointers suggest, an actual pending product release it would mark the first Intel-based Chromebook to be released by Samsung since May 2012’s Series 5 550. That model featured a then-blistering Intel Celeron 867 running at 1.3GHz, 4GB RAM and a 16GB SSD — and an eye-watering MSRP of $549!

But with Samsung recently announcing its withdrawal from the German notebook market, citing poor sales and increasing demand for its mobile products, the timing is curious. And in light of poor sales of the Samsung Chromebook 2, since pulled from sale in many other European markets, it remains to be seen if this could turn the tide.

We’ll update as and when we hear more. 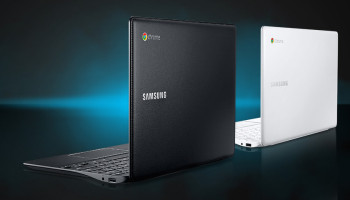 Samsung To Stop Selling Chromebooks in Germany
Read Next