CES 2016, and Acer has taken the wrapping off of a stylish new Chromebase PC.

It’s the biggest and most powerful Chromebase released to date.

Acer has seen fit to bump up the screen size and quality to an IPS panel with full-HD resolution; has ditched the white, plasticky-looking casing, super charged the processor choices; and sprinkled a few novel hardware innovations on top.

The result is a killer Chromebase – the sort we’ve been waiting for since LG debuted the first such device back in 2013.

The Acer Chromebase 24 sports a vivid 23.8-inch IPS display pushing a roomy resolution of 1920×1080 (known as FHD in abbreviation speak). A speaker grill sits beneath the screen (which will also be available with an optional 10-point multi-touch display).

The model will be available in a range of configurations, with a range of Intel Core processors promised. Yup, the low-power slow-poke Intel Celerons used previously give way to proper desktop processors.

A sleek chassis houses both the screen and system innards, while the switch to a traditional monitor stand enables the screen to be repositioned between 5 and 30 degrees.

Ports wise there is a selection of USB 2.0 and 3.0 slots, headphone/mic in jacks and an SD card slot for expanding storage.

Sadly Acer only appears to offer a HDMI out slot. This is handy if you need to work with two screens, but limiting for anything else. (The LG Chromebase launched in late 2013 offered buyers a HDMI in port, thereby allowing the Chromebase to double-up as a regular PC monitor, TV or Chromecast receiver).

Key specs at a glance:

It’s thrilling to see that the Chromebase category isn’t dead. With a paltry pair of devices released thus far – a seemingly endless churn of iterative new Chromebook models make the category seem stale by comparison – a new model was not a given.

A stylish new look, roomy screen size and vivid IPS touchscreen display combine to make my inner desire demand I try to find a purpose for one, if no one else’s!

As an interactive info kiosk in a hotel lobby or a family PC that handles online shopping, social networking, and basic media playback, the Chromebase can more than hold its own against similar low-power PCs out there, be they running Android or Microsoft Windows systems.

Acer is shy on pricing for this new model. But with previous Chromebases asking for around $329 you should expect a price tag in a similar range. 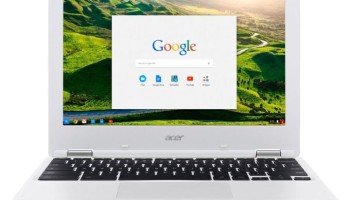 New Chromebooks From Acer, Lenovo Debut at CES 2016
Read Next