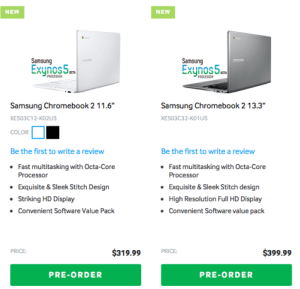 Pre-orders for the new, eight-core Samsung Chromebook 2 have gone live in the US.

The Samsung US website lists both the 11.6-inch and 13.3-inch models as available for pre-order with an expected shipping date of ‘early May, 2014’. Amazon US is touting a shipping date of April 28.

Starting at $319, the 11-inch version is available in black and white variants, replete with the faux-leather, stitched edge look Samsung is coating many of its consumer electronics in at present. It features 4GB of RAM, a 16GB SSD and an Exynos 5 Octa 5420 ARM processor clocked at 1.9GHz.

The Samsung Chromebook 2 is the first Chrome OS device to ship with so-called “bloatware” by coming pre-loaded with several applications and subscriptions that are aimed at offering ‘extra value’ to the user.

An ‘exclusive bonus case’ is being bundled with orders placed through the Samsung US online store prior to April 27.

Want in? More details can be found at the links below.

Samsung Chromebook 2 Pre-order on Samsung US

UserCH Tried, does not work as of Feb 2021. Chrome still…
Stop Google Chrome from Running in the Background on Windows

Richard My Chromebook Lenovo S340 does have Left-Click, I just have…
How to Right Click on Chromebook (And Other Touchpad Gestures)