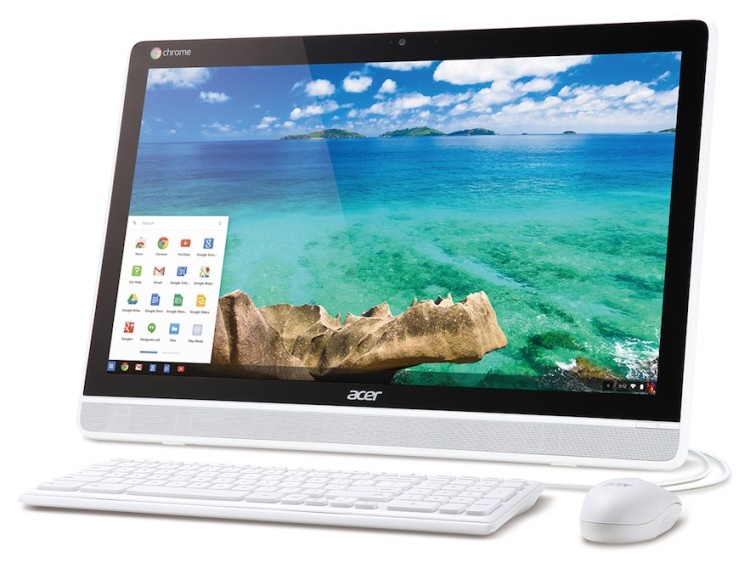 Think of a Chrome OS device and chances are you it won’t be of an all-in-one PC, like the LG Chromebase released in late 2013.

Hoping to change that is Acer, who today announced the world’s first Chromebase to ship with a touchscreen.

Chiming with the products unveiled at Google’s March 31 press event the Acer Chromebase is also based on an ARM processor, though in this case the NVIDIA Tegra K1. Chromebook fans will be familiar with the SoC as it featured in two Acer Chromebooks released last year, the CB3 and CB5 models respectively.

Acer say this chip “…help[s the Chromebase to] deliver a responsive and rich multi-tasking experience, and stay quiet even when running heavy workloads.”

Spec-wise, it should perform okay though its sole competitor, the LG Chromebase, does offer a more powerful processor in the Intel Celeron 2955U (Haswell).

Like the LG Chromebase, the Acer Chromebase is compatible with VESA mounts and arms and ships with integrated 3W speakers, on-board Bluetooth and Wi-Fi and packaged with a wired keyboard and mouse set.

For connectivity there is a HDMI out, USB 3.0 and USB 2.0 ports and a SD card slot. The Acer Chromebase comes with 16GB of onboard eMMC flash storage and comes with the obligatory gift of 100GB of Google Drive space fre for two years.

Price and any additional configuration options (color, RAM, etc) are not available as of writing. It’s expected to go on sale in the US and select regions later this summer.

At the right price this could be a good buy for basic computing needs. The addition of touch functionality is nice, too. Tegra powered Chromebooks may have met with lukewarm reception but the Acer Chromebase might give it a second chance at finding its niche.

That said, the lack of explicit IPS mention (which is becoming par the course with Acer products) and the lack of HDMI in (useful for hooking up a laptop, Chromecast, free-to-air TV box for TV viewing, etc) means it doesn’t quite step toe-to-toe with the original LG model quite yet.

What do you think? Leave a comment below letting us know if this device would tempt you…