The Acer Chromebook R13 is a device of many firsts.

Not only is it the first 13-inch convertible to be released, but it’s also the world’s first Mediatek Chromebook.

It may also snatch another first: the first Chromebook to be woefully underestimated.

The “meh” response to the Mediatek processor inside may have been premature as early benchmarks of the Acer Chromebook R13 suggest it could be one of the better performing Chromebooks released this year!

First, let’s get a closer looker at the specifications.

The Acer Chromebook R13 has a 13.3-inch 10-point touch display with IPS that offers a wide viewing span of up to 170 degrees.

A welcome resolution of 1920×1080 (FHD) and a 16:9 aspect ratio will help make photos and other content look great on the high-brightness backlit LCD.

The screen is mounted on a 360° hinge to allow for full convertibility: laptop, tablet, tent, and stand.

RAM-wise you get 4GB of onboard LPDDR3L SDRAM (non-upgradeable) and a choice of 16GB, 32GB or 64GB eMMC flash storage.

An Imagination PowerVR GX6250 GPU takes care of the graphics.

An HD webcam lets you make (and take) video calls in 720p. Two “high-definition” side-mounted speakers feature, as does a built-in microphone.

For expandability there’s a MicroSD card slot, 1x USB 3.0 port, a full-sized HDMI out, a USB Type-C port for display and power.

A combination headphone/speaker jack sits on the right-hand side, next to a row of LED indicators.

You get a full-sized Chrome keyboard to hammer on and a ‘fully clickable touchpad featuring click-anywhere functionality’ to stroke.

The Acer Chromebook R13 is available in just one colour: ‘Sparkly Silver’. But don’t be put off. The build quality of the device is said to be “fantastic”, and the device made from aluminium all around, bar the display bezel.

The built-in 3-cell battery provides up to 12 hours of use. 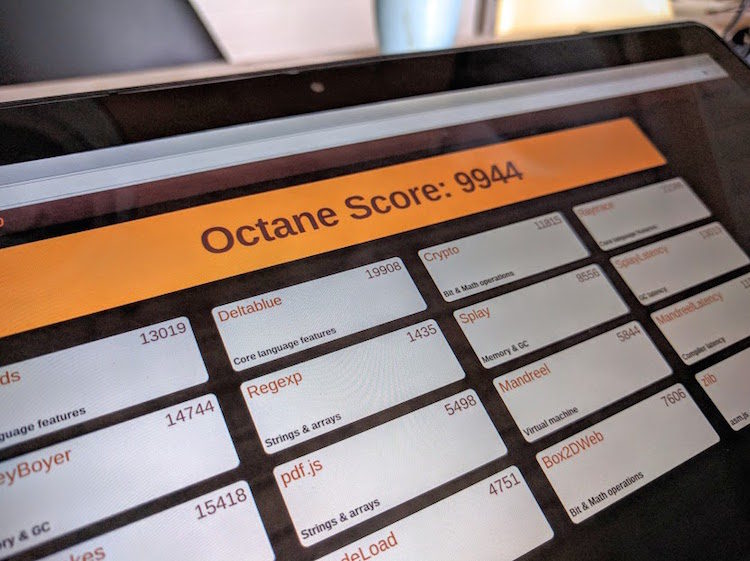 Kim Østergaard Christiansen has been hands on with a development sample of the R13 and described the device as “fast and snappy ” and says “the Mediatek chip absolutely lives up to the performance of equal Intel products.”

While I offer caution with any sort of benchmarks (real world usage matters more than arbitrary stress tests of web features you won’t use) the results of the R13 are, at the least, incredibly encouraging.

In Octane benchmarks tests the device posts a rather impressive score of 9944 — which is above the scores of the Acer R11, Acer Chromebook 14, or any other low-end Celeron N fare of late.

While this is not a knock-out score by any means, it does put the Acer Chromebook R13 among the better performing ARM Chromebooks, with only Intel’s fanned and mid-range processors outpacing it!