The French consumer electronics company Archos is launching a cheap Android laptop later this summer — but could it threaten sales of Chromebooks?

That’s a question that will be answered by consumers this June, when the 10.1″ Arcbook goes on sale.

The company describes their $170 clamshell as an ‘Affordable Mobile Productivity Enhancer‘. We like to call a spade a spade around these parts, so this is a netbook running Android (4.2, to be exact).

Known For Leading The Pack

The name ‘Archos’ may not be synonymous with innovation, but the company does have a solid track record in delivering affordable technology (if not cutting edge).

Over the years they have produced a range of devices, spanning everything from MP3 and portable media players to Windows 7 netbooks. Archos is often credited with producing the first consumer-grade tablets running Android.

Now they’re adding an affordable Android-based netbook to that list.

To answer the question posited at the start of this article one only needs to look at the hardware powering the ArcBook. Its dual-core A9 CPU is ‘decent’ enough, but the low resolution (just 1024×600) and 1GB RAM could make multitasking (surely key to ‘productivity’) a touch frustrating.

Archos say the device has “enough battery power for more than 10 hours of continuous use”.

Like the HP Slatebook 14 revealed earlier this month, the ArcBook is Google Certified so buyers will have full access to the Google Play Store and find Chrome for Android preloaded on first boot.

Archos is shipping the mini laptop with 15GB of free Google Drive storage and Office Suite Pro 6 preinstalled. This latter app, which supports creating and editing Microsoft Office files, normally costs around $10 on the Google Play Store, so it’s a nice addition.

Do you think Android laptops have the potential to disrupt the success of Chrome OS? Would you choose a similar device over a Chromebook? 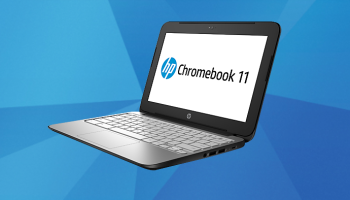