Even though Google has been bringing features, performance and technology updates to Chrome regularly, the interface hasn’t seen much change since the first version of Chrome.

Now, however, the Chrome team is bringing some much needed change to the interface. Friday’s Chrome Canary update – though it doesn’t yet change much in the way of looks – builds a foundation for more advanced interface features than the native OS elements usually allow. Chrome also controls the GPU acceleration, which allows for a faster interface.

You might already be familiar with the name ‘Aura’. It is the framework which is used to draw Chrome elements in Chrome OS. It’s shipped with the Windows build of Chrome for a while, but Friday was the first time it has actually been enabled by default.

So far, there aren’t many visible changes. One thing you’ll notice if you’re running the Aura build is the ‘a’ above the settings icon. Another is a fun fading animation when searching from the Omnibox, as well as a new scrollbar. It’s not a lot, but Aura is a pathway to more advanced and visually pleasing features in Chrome.

Aura is available in Chrome Canary for Windows now, and will soon be available in Linux too. It’s perhaps easier to spot on Linux because, for the first time, border controls look to match those on Windows:

According to the Chromium developers Google Group Mac OS X will not be supported. 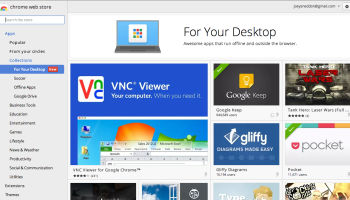