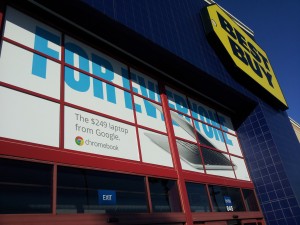 Best Buy is offering customers the chance to buy an Acer Chromebook for just $99 when trading in a working Windows XP PC.

The American retailer has launched a trade-in deal for old Windows XP computers ahead of April 8, the date after which all official support, security updates and patches for the eleven-year-old operating system will cease to be issued.

Customers can trade in as many as three working laptops (it’s unclear as to whether netbooks or desktops qualify) running Windows XP for a (minimum) $25 Best Buy gift card plus $75 of credit to put towards the purchase of a replacement computer.

As a result, anyone taking advantage of this offer can buy the Acer C720 Chromebook for just $99. Not bad, right?

But is the trade-in deal really as good as it sounds on paper? That depends. It’s certainly worth noting the stack of stipulations served up in the small print that accompanies the deal.

Firstly, the $75 of ‘new PC’ credit has to be used before May 3 – after this point it expires. Further more, it can only be redeemed against Windows laptops, MacBooks or Chromebooks sold at regular retail price — no doubling up on discounts.

Secondly, and perhaps just as importantly, any device traded in must be running Windows XP and must be able to power on. Damaged devices – e.g., those with cracked screens, missing buttons or trackpads coated in dodgy stains – are unlikely to be accepted nor will those missing any required power cables or chargers.

Best Buy say they reserve the right to refuse a device at their discretion — so be sure to smile at the folks in the Geek Squad!

If you were planning on buying a new notebook soon and happen to have an eligible Windows XP device lying about unused, I’d probably say this is a deal worth taking a punt on, especially if you’re eying up a Chromebook.

For everyone else I’d suggest first checking to see how much your old device might fetch on eBay or Craigslist. That way, you might end up with a similar amount of money to put towards a new computer, but without the time limit or requirement to purchase at full RRP.

To learn more head on over to the Best Buy website. 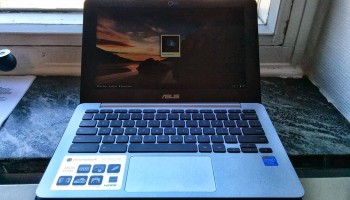