With a redesigned File Manager on its way to Chrome OS in the near future you might be thinking that the current version would be left as is.

Based on a recent batch of code commits to Chromium, the codebase that underpins Chrome OS, it seems not — the Chrome File Manager is getting some new features.

A new column will shortly appear in the Chrome OS file manager in developer builds, designed to show the ‘import status’ of files being uploaded to Google Drive.

Files.app (to give the utility its correct name) currently displays the progress of files being imported to Google Drive in two ways: as a progress bar in the bottom of the Files.app sidebar, and as a notification in the Chrome Notification Center.

A little bit of digging into the feature revealed that this new new column is a user-facing element in a much wider change to Chrome’s handling of file imports.

An entirely new ‘cloud import’ feature is on the way, one that will allow files stored on MTP devices like smartphone, external hard drives and SD cards — compatibility detected through a new background file system scanner — to be easily and quickly backed up to Google Drive.

The prompt for cloud import will appear in the ‘button bar’ (which will sit at the bottom of the file manager window when viewing files on a compatible volume, one assumes). Clicking the button will offer to “Import {number} files to Google Drive”.

If an active import is already in progress then the number of files remaining to be transferred, and the option to cancel the transfer, will be shown. The new column in the file manager provides another way to keep an eye on the progress.

This isn’t the first time Google has introduced an “auto backup” feature to Chrome OS. The Google+ Photos app is already able to scan SD cards in the background and automatically upload any photos found within the traditional “DCIM” folder structure to Google+.

The new cloud import code is likely to be reused by the upcoming file manager makeover. 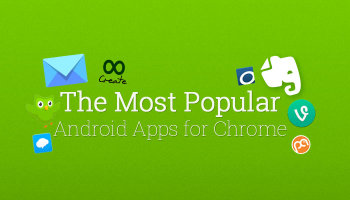 These Are The Most Popular Android Apps for Chromebooks
Read Next