Grab your phone and tablets and fire up the Play Store: there’s a brand new version of Chrome for Android ready for download.

Chrome 42 for Android brings a number of neat new features too (along the usual slate of bug fixes and performance improvements).

It’s also the last release for Android 4.0 ‘Ice Cream Sandwich’ users. Sob, But at least they get to nab some nifty goodies as a goodbye present.

New Features in Chrome 42 for Android

The biggest draw of this release is the ability to get push notifications from websites — yes, websites — regardless of whether you have Chrome open or not. It’s part of two pronged effort (in this release) by Google to help web developers ‘App-ify’ websites. 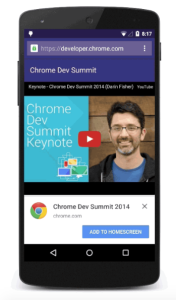 The feature requires a website to support it (few do at present) and sites will prompt for permission first, naturally.

Although you’ll find that few websites currently  support for the feature at the moment you can expect the web to be awash in push permission prompts in no time as the feature is also supported in the latest Chrome desktop release, too.

Whether it’s urgent weather warnings, breaking news on your favorite blog or getting enough Meow Meow Beenz to be considered cool, you’ll soon be awash in notifications.

The second prong in this forced analogy fork is aimed at making it easier to be add websites to the Android home screen.

Sure, this can already be done this manually from the Chrome Settings menu. But Chrome 42 for Android knows you’re lazy. Providing the website supports it, you’ll soon see an ‘Add to Home Screen’ prompt appear on websites you visit frequently. One tap and you’ll get a nice shiny icon added to your homescreen for quick access.

If you have Chrome for Android installed look out for the new update rolling out this week. If you don’t have it installed, go grab it. It’s free.