A new-look Audio Player is available for testing in the latest Dev Channel release of Chrome OS.

The app, which is part of the Chrome file manager, is used as the default option for opening local audio files.

While the incumbent version is perfectly functional, the limited set of features, lack of session save support and dated interface of the app have meant many Chromebook owners prefer to use third-party alternatives like Remo for their media player needs.

But with a revamped UI, that could be about to change.

An updated version of the Chrome OS audio player can be enabled on the latest developer channel release of Chrome OS. It features new options, including ‘repeat’ and ‘shuffle’, and an overhauled UI sporting a brighter look using a colour palette in keeping with the rest of the OS.

The system accent colour (blue) is inherited for selected items, and a Chrome-coloured green is used to signal when an item is in an ‘active’ state (e.g., shuffle turned on, repeat turned on, amount of time elapsed, etc.).

An expanded set of player controls sits at the bottom of the player. Space has been afforded by moving the track progress bar above the control strip.

The play/pause, next and previous buttons, which were spaced out in the old version, are now centre-aligned in the middle of the strip and bookended by new features:

The progress bar has been made much thinner, and the ‘seek-ahead’ scrubber has been condensed from a glossy and slightly-pixelated lozenge to a discreet flat circle offset by a subtle drop-shadow.

Although the overall design looks thinner the target area — the bit which reacts to your mouse or touch — remains largely unchanged. Appearances can be deceptive.

The ‘active’ green accent is used to relay the elapsed portion of the currently playing track in the progress bar , which is also bookended by a ‘time elapsed’ count on the left, and a ‘total track time’ on the right.

In addition to design tweaks the update also adds save and restore status for the following options:

As a panel app the audio player sits next to system tray and can be minimised and restored by clicking its icon. The main player window is also able to ‘tear off’ and be positioned elsewhere on the screen and, if you have the screen space, ‘docked’ to the right-hand side.

Finally, to go with the new look there is also a new icon:

The new music player icon in Chrome OS is… Well, this: pic.twitter.com/x5mLC4oZKS

As the player is part of the Chrome OS file manager it is not available to use or install outside of Chrome OS.

To try it out you’ll need to be running the latest builds of Chrome OS Dev (ARM Chromebook users excluded for now) and enable the following flag:

Is the redesign a success? I certainly think so. It adds some much needed flavour to what was a stale app lacking finesse. Here’s hoping that the built-in video player is next in line for an Extreme Makeover: Chrome Edition.

Let us know what you think in the comments below.

With thanks to Craig Tumblison 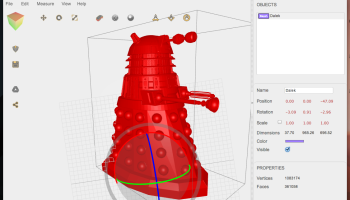