Google has confirmed that a second generation Chromebook Pixel will go on sale ‘soon’.

Speaking at the Team Work 2015 event this week, Google’s Renee Niemi announced that a successor to the high-end 2013 model is on the way, but stressed that Google will only be making a small number of them.

As before, the Chromebook Pixel 2 will be a development machine primarily aimed at developers. It won’t be pitched at, much less priced for, regular consumers.

The video appears to have been made private since this article was published.

Reading between the lines it is easy to leap, as we did earlier in the month, and see the Pixel 2 retaining both the look and design of the original. It saves on costings, design, manufacture and tooling.

What we know about the Chromebook Pixel 2

What we know about the Chromebook Pixel 2 is that it still has a 12.85-inch screen at a presumably equally eye-popping resolution as the first, board references mention built-in fans and we know it will feature the new reversible ‘Type-C’ USB ports.

But ‘proof of concept’ sounds interesting. The original Chromebook Pixel was the first Chrome device to feature a touchscreen, a high-end processor and a lightbar. Could the second attempt be similar in pushing new features and possibilities?

It’s already looking like it will be the first device to ship with Chromium’s new “Freon” pseudo-display server replacement.

Might it also feature Intel’s powerful new Skylake processor? There’s been plenty of chatter, and quickly hidden bug references, to a Chromebook that ‘docks’ with a keyboard recently, could a Pixel 2 offer signs of that work?

What do you hope to see in the second-generation Pixel? Let us know below, or on Twitter, Facebook or Google+. 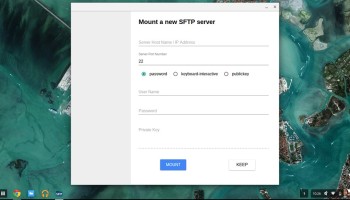 Access SFTP From Your Chromebook With This New App
Read Next