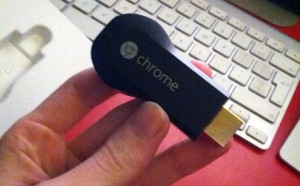 Mozilla is working on baking Chromecast support into the mobile version of their Firefox web browser.

The news comes via a recent set of meeting notes summarising current development goals for Firefox for mobile.

“Second screen …making good progress. Hoping to have Netcast and Chromecast support landed by the end of the week.”

In addition to supporting Google’s £30 streaming dongle it also reads as though Firefox’s fledgling screen mirroring feature will bake in support for the £50 Roku Streaming Stick.

It’s not yet clear to what extent Chromecast support will reach, which builds will be supported and how it will be integrated.

The feature is some way off getting the official nod just yet, but should appear in Firefox Nightly builds for Android sometime shortly. Here it will under go testing before being included in a future stable build of the browser.

If you can’t wait, you can already mirror the content of tabs from your phone or tablet using Chrome for Android.