It’s all a-movin’ on the Chromecast front: from app updates, to hackathons; from a new SDK to wider availability of the device itself online.

In this round-up we take a quick look at some of the more notable news in the world of Google’s Chromecast.

In the biggest sign yet that Google’s media streaming device Chromecast is about to get some much-overdue attention, a dedicated section for supported apps has appeared in the Google Play app store.

Its shelves are a bit bare at the moment, but many of the essential big-name apps are there, including:

Talking of Android’s app store, the official Chromecast app (used for setting up the device) has received a minor visual update. Falling in line with other Google apps it now uses a drawer menu to house settings, and features a small link to applications that are compatible with the device.

Are you selling the Chromecast? No? Well that makes you just about the only one!

I’m exaggerating of course, but following Motorola’s lead US super-chain Walmart ($29.98) and the US mobile network Verizon ($34.99) have also added the media-streaming device to their online stores.

Is this a sign that it’s doing well? That’s hard to tell.

Official sales stats on the Chromecast aren’t publicly available, so the sudden branching out to regular retail outlets (previously being an Amazon and Google Play Store exclusive) means it is either selling really badly – “Please! Help us shift some stock!”  – or really well – “Please! Help us keep up with demand, superstores!”.

I’m inclined to think that the reality lies somewhere in-between.

Free Movie When You Buy From Google

If  a discounted dongle from Walmart doesn’t tickle your pickle, Google are offering a tempting festive offer: buy a Chromecast from the Google Play Store, BestBuy or Amazon US and they’ll throw in a festive free film rental!

The caveats are limited: you must buy from one of the US stores above, and online before December 25th; the film rental cannot cost more than $6 – oh, and you have to be in the USA.

Google Play purchasers will get their gift code via e-mail, while Amazon and BestBuy customers will find it on their receipts.

Best bit: Amazon are currently selling the Chromecast for just under $30.

Since the launch of the streaming device earlier this year, 3rd-party developers have been chomping at the bit to be allowed to build apps for the Chromecast and have a way to distribute them officially.

Fast forward a couple of months and there is finally a sign that things are beginning to move in the right direction: Google are holding a ‘Chromecast Hackathon’ next week, say Engadget.

A number of prominent community developers have been invited to the event. Here, Google will also offer a preview of an “upcoming release” of the Cast SDK.

I’ve always been convinced that 3rd party developers will be crucial to the success of the device. While “big name” apps like Netflix and HBO Go are vital. it will be the wider developer community who will exploit its potential to the fullest. 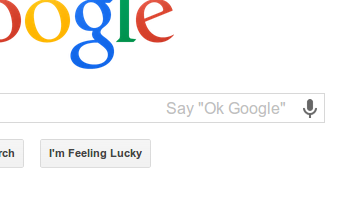 New Google Extension Brings ‘Ok Google’ to Everyone
Read Next