Being the most anticipated Chromebook this side of the Pixel means that the Nvidia Tegra-toting Acer Chromebook 13 has a lot of expectation to live up to.

Acer has given a handful of select tech pundits the chance to go hands-on with the device over the past week or two, with published reviews coinciding with the IFA 2014 tradeshow event taking place in Germany.

The overall verdict on the devices, which start from $279, is largely supportive but there’s a mixed take on how well the quad-core ARM processor performs.

On The Verge of a Letdown

We’ll start with the one you’ve all probably read: The Verge. Their appraisal gives plus points to the overall style of the device, describing it as“the best design this side of the Pixel”, and offers brownie points for the long battery life, lack of noisy fan and roomy touchpad.

But what didn’t impress their reviewer, Dan Seifert, was the performance, which scored a measly 5/10:

“Trying to do more than one thing at a time wasn’t easy…Streaming music shouldn’t stutter every time you open a new tab or launch a Chrome app, but it does on the Chromebook 13. [It] would inexplicably freeze up for a few seconds at a time, interrupting my workflow and driving me mad. Switching back to Acer’s C720 with an Intel Core i3 processor felt like cutting the parachute off of a drag racing car and stepping on the gas.”

‘Performance is said to have improved after updating Chrome OS’

For optimists there’s some good news. Commentary of Seifert’s review highlights ZDNet’s James Kendrick and his review.  Kendrick also experienced issues with lag and stuttering during his hands-on with Acer Chromebook 13 — but only at first:

He goes on to describe the device as having ‘smoother performance than Chromebooks with Intel processors. The Nvidia Tegra K1 is definitely a better performer than [Haswell and Bay Trail Chromebooks].”

This enthusiasm is backed up by Slashgear’s Chris Burns, who describes his 1080p review seed as “the finest Chrome OS-based notebook experience outside of the highest-end Chromebook Pixel”.

“Whatever you’re able to throw at this Chromebook, you’ll be able to do it, no issue.”

Having not (yet) been able to try one first hand I can’t vouch for the performance, either before of after the latest update. It certainly sounds like there were noticeable issues and that some of this has been addressed through an update.

But is the change as dramatic as claimed? Hmm…

Screen Is Good, But Not Great 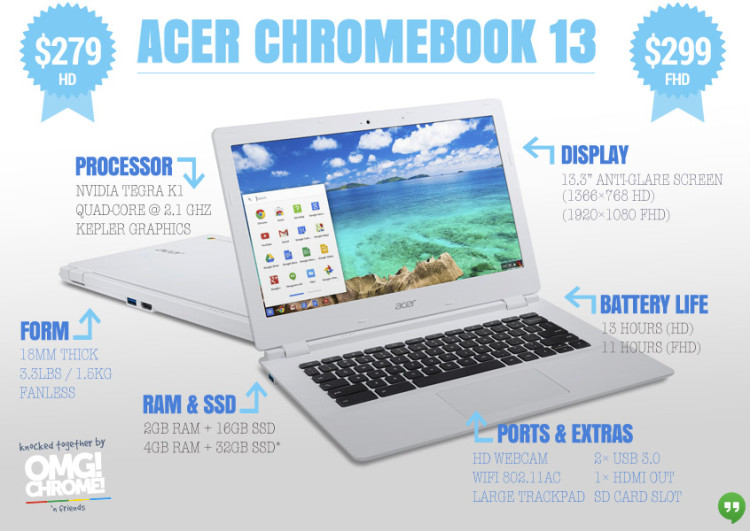 The opined (de)merits of the Nvidia Tegra K1 aside, opinion on the display quality is just as mixed.

‘Opinion on the display quality is just as mixed’

With matte TN displays nearly ubiquitous across most Chromebooks, it’s disappointing to hear that the HD and FHD Acer Chromebook 13 screens continue to underwhelm.

Gigaom’s Tofel describes the display of his 1080p review unit as having ‘reasonably good viewing angles’ but nudging the display towards you inverts the image on screen.

The Verge (whose reviews are always gold, whether you agree with them or not) were even less impressed with their FHD model. They describe viewing angles as ‘terrible’ and colour reproduction as ‘a bit washed [out]’.

It’s not all bad news. Slashgear only found the viewing angles lacking, noting that sharpness and color quality were decent enough. The resolution bump of 1080p was found by most to be worth the trade off in battery.

The Verge: 7/10 — They like the design, find the touchpad large and responsive and love the long battery life. They don’t like the screen and feel the performance of the Nvidia Tegra K1 processor is below that of Intel CPUs.

ZDNet: 9.5/10 — ‘The performance is so good that it will change the laptop landscape’, they say. Battery life and good looks make it a winner in their eyes, but list the ‘plastic construction’ as a negative.

So Is It Worth Buying

Four reviews, split on the performance. But if you’re on the fence about buying this model don’t be swayed too much; examine your own needs.

Would you rather a 13 hour battery life over the ability to run a few extra tabs in parallel? Might the high-quality keyboard and trackpad make working on it nicer than a marginally more powerful Chromebook?

Once the model starts shipping from Amazon and other online retailers we’ll be able to gauge the true performance of the device in real-world situations.

If you’re interested in buying, want to know more about the specifications and release dates, see our previous article or head over to Amazon. 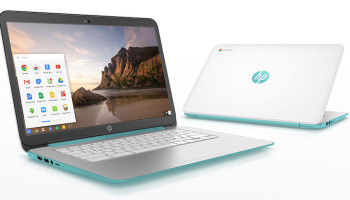