Google’s plan to wean the web off the archaic NPAPI plugin architecture by the end of 2014 is well underway, and the latest plugin to get a modern makeover is one of its own.

Google+ Hangouts no longer requires a separate plugin to be installed in Chrome for video and voice chat to work. Using the Web Real-Time Communication API (WebRTC) and Native Client (NaCl) Google is able to provide a native video chat experience out of the box in Chrome.

Although NaCl is a Chrome/ium-only technology, the key aspects of the service —  audio and video — are served by WebRTC. Other browsers, such as Firefox, should therefore be able to also service up Hangouts support without a plugin at some point in the near future, too. 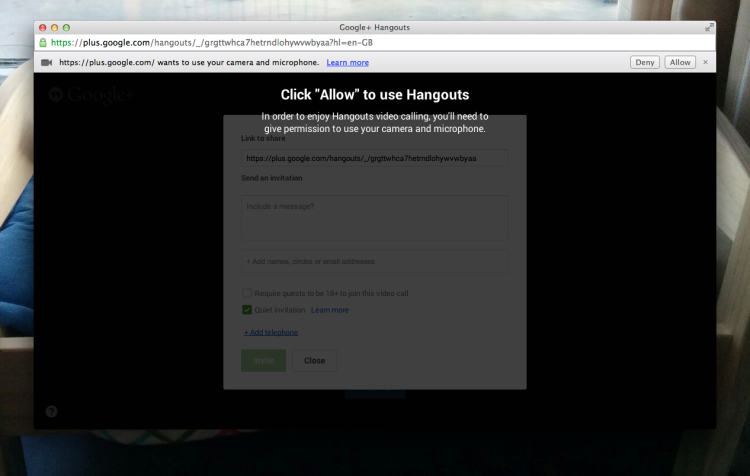 With Google+ Hangouts being one of the most widely used NPAPI plugins Google had to implement a dependable and alternative solution.

Thankfully the end result is an update that, Google says, makes it ‘easier than ever’ to start a video call using Hangouts:

“You’ll now be able to launch Hangouts in Chrome without having to download and install a plugin. Just click to start the Hangout, allow Hangouts to use your camera and microphone, and you’ll be good to go!”

The change is now already in effect for Chrome Dev and Canary users on Windows, Mac and Linux and will find its way to Beta and Stable channel users over the coming weeks.

Curious to see what type of plugins you have running in Chrome? Head to ‘chrome://plugins’ in a new tab to take a nosey. Click the ‘details’ option in the far right hand corner to reveal extra options, including disable/enable toggles, build type (NPAPI or PPAPI) and grant ‘always run’ permission.