Google recently released its 5th foray into the smartphone space with the Nexus 5 – but what’s it like?

In the article I share my take on Google’s newest flagship Android device. 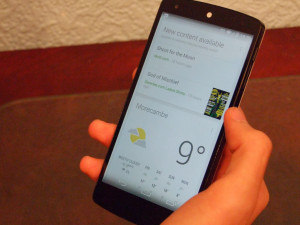 The Nexus 5 comes with a pretty standard assortment of accessories: a longer-than-usual USB cable, a 1.2A mains plug, SIM card ejector tool and a few booklets. There are no headphones, but given that most in-box headphones tend to be fairly substandard, this isn’t a massive loss.

I ordered the 16GB white version, and it really is a beautiful thing.

Like all other Nexuses, the 5 has no branding whatsoever on the front. It only has a subtle notification light below the screen and a camera, speaker and some sensors above the screen. On the white version, the speaker is the only thing that stands out, which is helpful as it helps orientate the phone when you take it out of your pocket.

The Nexus 5 uses the newer Gorilla Glass 3 for the screen, so it’s both tougher and more scratch-resistant than that found on the Nexus 4.

On both colour models the sides are black. The power and volume buttons are in their usual places, the headphone jack is on the top and a micro-USB port is on the bottom. The volume and power buttons are made out of ceramic, although I’m uncertain of the benefit of this. 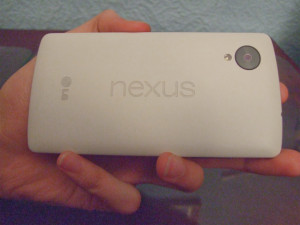 Perhaps more unusually the speaker is also on the bottom. Even though there’s two grilles at the bottom on the phone, there’s only one speaker, and the other grille is used for the microphone. This is slightly disappointing and at the moment there appears to be a bug affecting the quality of the speaker in some apps, as Android Central confirmed.

The positioning of the speaker can be a little annoying, as you can cover them with your finger and muffle the sound, especially when holding the phone landscape while playing motion controlled games like Riptide GP2.

The back itself is a wonderfully silky and smooth, high quality plastic, with a landscape Nexus logo centrally across it, a tiny portrait LG logo below it and hardly visible legal information.

The rear camera protrudes slightly out of the top-right corner of the device, with the LED flash located below it.

Finally, neither the back cover nor the battery can be removed. We’ll cover the importance of this in a moment.

Overall, the device feels solid, well made and it never creaks.

The screen is probably a highlight of this phone.

Let’s start with the screen, as it really is a thing to behold.

It’s a 5 inch display with a full HD resolution at 445ppi (pixels per inch) and actually pleasing to look at. Even the smallest icons are crisp and the overall display is bright. Even better, the Google Play Store now offers more high-resolution apps than there were back in January when I reviewed the Nexus 10.

Aside from being, perhaps, a little bit big, there are a few niggles to be found with it. Even then, most of these only depend on how you hold the phone. It’s quite big, so it’s difficult to reach some areas of the screen sometimes. The narrow screen margins can also cause unwanted touches, but on the other hand keep the size of the phone small.

The screen is also unreasonably light, so you’ll probably end up keeping it at 5–10% (or even 0% in dark conditions, where it can still be too bright) instead of automatic brightness. Since the screen is clearly visible outside at this time of year on 10% darkness, I’d also imagine it’ll produce no visibility problems in the summer either.

There’s a 1.3MP camera on the front and an 8MP camera with optical image stabilisation at the back. While I haven’t seen that much of a change with the front camera, the back camera is a big improvement over both my Galaxy Nexus and my Nexus 10. While it’s not a mind-blowing camera, it’s now far beyond what you need to shoot with a smartphone and the photos look good. They’re crisp and the colours are vibrant.

I took a selection of shots which you can see below, but unfortunately I did not have the ability to experiment with low light shots. I’ve included both normal and HDR+ versions. The latter certainly look more pretty, but a bit oversaturated in places.

Now, the battery. This is definitely the worst thing about this phone. For the first 6 days of using it I found it to be awful, to the point where it barely lasts my usual 7–16 daily routine of tweeting, messaging and listening to music. However, on the day of writing it has improved considerably, leaving me with 33% rather than 10-15%. It’s definitely inconsistent, and the response on Google+ seems to reflect this: a few people get really great battery life and a few people can barely make it through the day.

One day, it lasts less than eight hours of only moderate use. The next, more than 16. It lasted 3 hours, 43 minutes on the Verge Battery Test, which is among the lowest scores we’ve seen on a high-end phone in some time, but it would occasionally surprise with its longevity.

The screen is likely to be a huge catalyst, but considering how wildly the battery life varies across days and users, it’s probably something Google needs to take a hard look at. It’s disappointing this wasn’t fixed before release, so if you really care about battery life you should probably hold off a little while or invest in a portable battery.

On the brighter side, this phone does have Qi wireless charging so you can charge it without any wires (apart from the one going to the charger, of course!).

As far as the performance goes, this Nexus 5 is fantastic. It whooshes through all parts of the OS, and games too. I played popular games like Riptide GP2 and Temple Run 2 and they ran without any lag whatsoever.

Even though we’ve already covered the new features in Android 4.4, I’ll take another look at some of them here now that I actually got to use them.

First up: the updated launcher.

In certain situations the notification and navigation bars are now partially transparent, and these situations include the launcher and Google Now. This makes the launcher really pretty.

Google Now is now accessible from the left-most side of the launcher and the widget picker has now been relegated to a long press of the home screen instead of a tray in the apps list (which is now transparent). Google Now can supposedly be activated by saying “OK Google”, but this only works from the home screen or Google Now itself, and only when using US English as the language for Google Now. It’s a bit redundant as in those situations I’m only one tap away from it, but it’s a cool trick nevertheless. Overall, the launcher has been pleasantly refreshed, with a definite iOS 7 influence.

Another new feature is the smart dialler that brings the traditional dialler into the smartphone era. Apart from searching your local phone contacts, you can now also search local businesses. While it’s not a comprehensive search where you can narrow it down depending on exactly what you want, it’s definitely good enough. It reliably found what I wanted it to find.

In the future, the dialer will also show the details of other Android users you don’t have in your contact book, unless they disable this option. Overall, the whole dialer is prettier and easier to use.

You can quickly switch between SMS and Hangouts conversations when you’re in the chat window by tapping their name. This is all helpful, as it reduces the focus on where the conversation is held, but I expected something more intelligent from Google. The conversations should be merged and the appropriate medium should be selected automatically, depending on whether you have an internet connection and if the other person is online in Hangouts. However, this is likely to come in a future update as Google continues its push for Google+ and Hangouts.

There’s also a bunch of other changes, like “tap to pay” capabilities, a Chrome-based WebView, system-wide Emojis and new printing capabilities outside of CloudPrint. You can view them in more detail on Google’s Android 4.4 page. 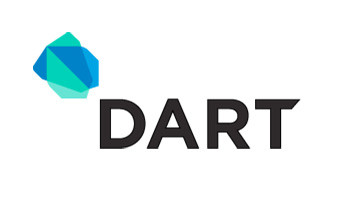