Ever fancied browsing the web Minority Report style and/or while eating a sandwich?

Google Chrome extension Leap Touch enables owners of the Leap Motion controller to navigate their way around the web with nothing more than a spare hand waved in the air.

The add-on was developed by two Australian developers in less than a week.

“We’ve tried to keep the gestures as simple as possible, without a complex interface for people to understand. This is aimed at occasional use, not constant use, which we think is better for this device,” they explain on the Leap Touch website.

Support for additional browsers could appear further down the line, but for now it’s a Chrome-exclusive. 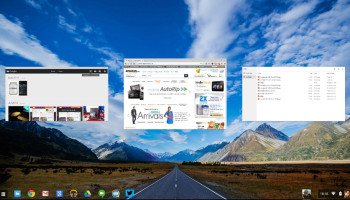 The New Overview Feature in Chrome OS
Read Next