So Google I/O is now over for another year. We have new products to try out and plenty of tools for developers to get excited about and build great apps for Google’s ecosphere.

Looking back through our predictions for I/O 2013, I can not decided if we were very wrong with what Google was going to announce or if Google still has plenty to show us before the year is out.

In this editorial, I will give you my thoughts on this year’s event.

Like with Steve Ballmer, it was all about the developers this year. I am not a developer, I have never coded. But I do understand some of the basics such as what an API is and what an IDE is used for. Earlier this week Sundar Pichai, VP for Android, Chrome and Google Apps, told Wired that this year’s announcements will be focused on developers rather than consumers. And thats what we got.

Android Studio looked awesome, it was the first time Android developers will have a dedicated IDE to use. Being able to quickly view different screen sizes on the fly and makes changes, just looks brilliant and super useful. Changes to the Google Play Developers Console will hopefully increase app revenue for developers, which is currently much lower than on iOS.

Google Play Services was updated too, which added a bunch of new APIs which developers can implement into their apps. The new synced notifications using GCM and new location-based APIs got the most appulses.

A feature of Google’s mobile ecosphere which I believed was lacking was gaming. Apple has got Game Centre and Microsoft has got Xbox, Google needs unified game service. It seems such an obvious and easy system for Google to implement; it has the social side with Google+ and it has its cloud services to be able to do game syncing and cloud storage. Thankfully Google has finally implemented a gaming system into Google Play Services called Google Play Games services. It has added everything I was after; leaderboards, achievements and online matches using Google+ and game data cloud syncing. I have tried out the new service by playing World of Goo and Riptide GP, and it works well.

However, I am very disappointed that there isn’t a Google Play Games app. Like Game Centre on iOS, i was hoping for the following:

Basically an app which is the centre of Google Play Games, I can see all my score and achievements all in one place without having to open each game. Hopefully, Google will add this feature soon.

Android Police has put together a list of Google Play Games enabled games.

During the keynote it was hard to understand all these new features to help developers build apps, distribute and market their apps and APIs to plug their apps into Google services. Although, when you heard the cheers from the audience, you knew it must be good and important for Android. From our point of view as users, if developers love it and can make developing apps easier for them, it will eventually benefit us with awesome apps we get to use.

It was a big surprise that we didn’t get a new version of Android. Rumours leading up to the event pointed to Android 4.3 to be shown off at I/O, but it never materialised. Though, it doesn’t mean its not coming. Server logs show that Google is testing 4.3, and even Googler Sara Sinclair Brody confirmed a new version of Android is on the way.

With no new version Android at I/O, some have argued this is a good thing. It gives OEMs time to catch up, since many devices are not even on Jelly Bean yet. Android Central’s Jerry Hildenbrand point out that the update to Google Play Services was more important than a new version of Android, since it added many new features for apps to take advantage of and plus all Android devices will receive the update regardless of OEM or carriers control.

I will make a small prediction (even though I have not been terribly good at that this week), Google will announce Android 4.3 which will ship with the new Nexus 7 in July.

Amazon has a music cloud locker. Spotify has a subscription music service. iTunes has a music store. Google now has all three.

When you take a step back, have a look at what Google has achieved with Google Play Music, it now provides the ultimate music service. Before, you had iTunes which provided users with a brilliant music store but a very an old fashioned syncing solution. Amazon has a great music store + cloud locker, but no subscription based music option. Spotify has the subscription model which is very popular at the moment, but no means to buy music which is missing from the Spotify library and be able to store it in the cloud to sync with all your devices.

This great freedom with Google Play Music is why I will be cancelling my Spotify subscription when it arrives in the UK. The ultimate music service, with store/subscription/storage. No other music service can offer this at the moment, and its may be unlikely for some time. I think only Amazon could match this.

Some great improvements to these core Google services.

You don’t need me to tell you how great they are, try them out for yourself!

It was really disappointing that I/O did not have a big announcement for Google TV. We did get an update to Google TV to Android 4.2, with a promise that Google TV will now follow the same development cycle as Android. This move is fairly significant since we could soon see Google encouraging Android developers to build the same app for the phone, the tablet and the TV. Its just another screen size to build for, since the code base will be the same going forward.

No Nexus Q running Google TV was also disappointing, though Google did confirm that new Google TV hardware will be coming later this year. Plus, it has been spotted by an FCC document that the Nexus Q may be making a re-release soon.

Google Play Books got a brilliant update during I/O which was kept quiet. Users can now upload their own PDFs and EPUBs to their Google Play Books cloud locker via the Google Play website and the documents are synced to all your devices. The implementation is brilliant. I uploaded a EPUB book and Google was able to find the cover picture and all the book information, so it looks like a regular book purchased from the Google Play Books store.

One final closing comment. A few months ago, just before the Google I/O tickets went on sale, I posted this comment on my Google+ profile:

I think people are missing the point of Google I/O

Its an event for android and web developers to speak to the Google team to understand how to best make use of APIs and build better apps.

Its not a place to pick up free Google hardware. Its a wasted ticket which could have gone to a developer wanting to learn.

With a much more developer-focused event and with very little hardware announcements, it should be a clear indication to non-developers that this is not an event for them. Google did give away a Chromebook Pixel to all attendees, but compared to previous years, it’s considerably less to what they used to give out. 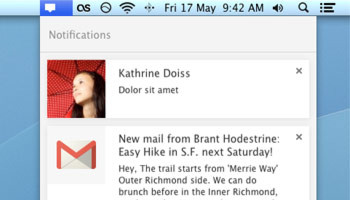 Chrome Message Center Arrives in Canary for Mac
Read Next