I’m in love with Chromebooks all over again.

Despite being at the helm of (arguably) the most popular Chrome-related blog on the web, I’ve been without a Chromebook to track changes, test apps, or flip flags on for quite a while.

Unlike some similar sites we don’t get loaner devices from OEMs, review units, nor have the (enviable) benefit of Google sending us freebies.

But last week I managed to snag a brand-new Acer Chromebook R11 (the 2GB, dual-core Celeron model — welp) at a very attractive price.

The Acer R11 is not the fastest Chromebook on the planet, and the limited amount of RAM probably means I won’t enjoy the full fruits of the Google Play Store on Chrome OS — but it’s a Chromebook!

Rolling through the initial set gave me a renewed appreciation of how simple, streamlined and straightforward the Chrome OS experience is, from box to backpack.

But it was only as I logged in anew to the desktop that I remembered how amazing Chromebooks are.

I’d previously been using a Samsung Chromebook Series 5. Yup, I was seriously using something that old to track and cover Chrome OS for this site.

A first-generation device with an anaemic Intel Atom chip, I never appreciate how much of the Chrome OS experience over the last couple of years, particularly as Material Design elements like the Polymer-coated file manager arrived, that I’ve sort of been missing out on.

I’d gotten used to not using Google Drive, force-quitting Google Now as soon as I logged in, and disabling extensions.

Without the workarounds the Series 5 is very much a device designed for Chrome OS as it was back when it was literally just a browser with some web-panels tacked on — and with them it was barely any better!

So I was in for a pleasant surprise as I powered up my R11.

‘Experiencing Chrome OS on a modern Chromebook has seriously (re)impressed me.’

I’ve been using my device for a little over a week now.

Experiencing Chrome OS on a modern Chromebook has seriously (re)impressed me. The difference between it on this device compared to my old one is like night and day, or switching from VHS to HD (and not just because the sumptuous IPS display is wonderfully crisp).

The R11 has helped to give me an all new appreciation for Chrome OS and what it can do.

Firstly, how fantastic is it to be able to get up and running in just a couple of minutes? This part of Chrome OS really doesn’t get enough love.

Unlike Windows where there’s endless reams of updates to install, wizards to walk through and “now what?” questions to ask yourself, Chrome OS remains reliably familiar.

Sign in, and all your apps, wallpaper and settings are there, exactly as you left them on your old device.

Now, I have to be straight with you: I don’t use a ton of extensions, and I don’t tend to browse with more than a handful of tabs open. The way I use Chrome on any device, be it my MacBook or a Chromebook, isn’t by any stretch the same as “power users” or the like.

It’s a bittersweet appreciation of how well the parts work together what with the limbo Chrome OS currently sits in, a limbo rung lower by Google’s decision to — controversy klaxon — kill Chrome apps (though they’ll keep running on Chrome OS, there’s next to no incentive for developers to make them).

Chrome OS feels so mature, so well oiled, and so responsive on the R11 (I can’t attest for other devices as I haven’t tried them). I hope Google’s plans for it don’t mess things up (cough, looking at you mash, cough).

How’s Chrome OS holding up for you? What device do you use it on? Are you a new user? Share your own experiences and impressions in the comments space we’ve carved out below.

Home » Editorial » So, I Totally Forgot How Amazing Chromebooks Are 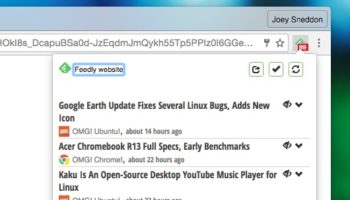