The ASUS Chromebook Flip 433 is a new Chromebook on the way from ASUS, and in this post we take a look at its specs, price and availability.

Now, it’s important to note that, at this stage, the ASUS Chromebook Clip 433 has not been officially announced or formally confirmed by ASUS themselves.

But eagle-eyed Kevin Tofel spotted a bunch of information about the device on the FCC website, replete with photos. Nice work, Kevin!

Because of the presence of the Asus Chromebook Flip C433 on the FCC website, where it’s being tested for compliance, we can confidently say that it’s headed to retail in the USA.

And since most ASUS Chromebooks sold in the US also go on sale in Europe, it’s probable that we’re looking at a new worldwide model — nice!

As a “Flip” model the ASUS Chromebook C433’s 14-inch touch display can be folded back 360 degree to form a slate, according to the official user manual. Screen resolution will likely be FHD (1080p) rather than 2K, based on its specified dimensions.

And, like the aforementioned devices, the C433 touts a pair of USB Type-C ports (including a combo port for charging, data and video out), a single regular USB Type-A, microSD card slot, and 3.5mm audio jack.

Kevin notes that the C433 unit in tested by the FCC features (a rather decent) 128GB of eMMC storage. This suggests we’ll see at least model variation with this amount, though do expect a marginally cheaper version with half the storage too.

Also of note is the relatively spacious touchpad.

With no official details on this device besides the FCC report it’s too early to guess at the ASUS Chromebook C433 price and release details other than it’s heading to the US, and will likely be pitched somewhere between the C425 and the existing Flip 434. 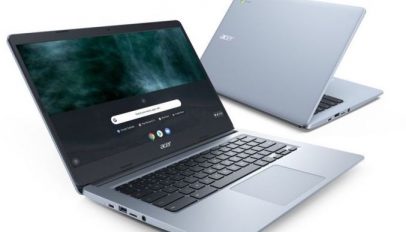