2012 is now over, and it was an important year for Google Chrome. Finally overtaking Microsoft’s Internet Explorer in usage share and releasing a mobile version of Chrome for Android and iOS.

Chrome continued to grow over 2012, finally reaching 36.4% by December, with Internet Explorer at 30.8%. While Internet Explorer lost 7% over 12 moths, Firefox also lost usage share failing by 3% down to 21.9%. Interestingly, Safari also gained usage share in 2012, from 6.6% in January to 7.9% by December. Opera continue their fall from 1.9% down to 1.2%. It appears WebKit-based browser is the hot choice at the moment. 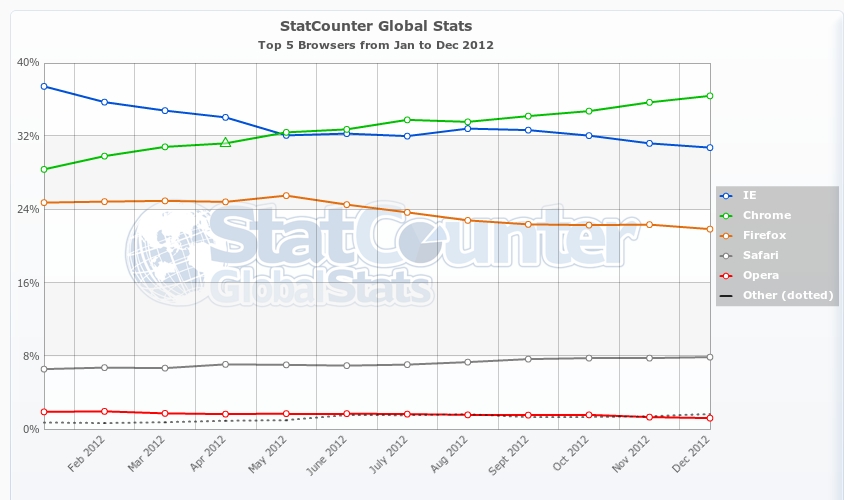 While Google has had great success with Chrome on the desktop, mobile has been less than impressive. Chrome for Android was launched in February, with the iOS version released in June. One thing to note, Android browser relates to the built-in web browser in the Android OS itself, the stats include Android 1.0 to 4.2, Chrome is a separate browser.

Chrome for mobile has struggled to gain traction over Android browser, Safari Mobile and Opera Mobile. Starting with 0% in February, it only managed to secure 1.5% by December. Chrome for mobile has a difficult market to break into. On the Apple side, many iOS users are generally happy with the Safari browser, so it will be difficult to convert users. On Android, Chrome already has problems since it can only be installed on Android device with version 4.0 and above, this cuts out about 65% of devices, since most run Android 2.3 and below. As more Android devices move to Android 4.0 and 4.1, we should start seeing Chrome for Android to increase in usage share.

Safari for Mobile still holds the majority usage share with 60% up from 55% back in January. The Android browser has seen steady growth over 2012, from 17.8% to 22.1%. While Opera still generates reasonable interest with 10%, although it has fallen from 20%, although this maybe down to the trend of people moving to smartphones, most Opera users are using “dumbphones”. 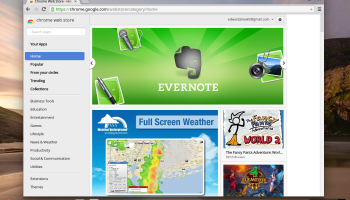 Getting Started with your Chromebook
Read Next